Kay (Maloney) Fuller, one of Doc’s nine half sisters and brothers.

Kay Discovers She Has An Older Half-Brother

In 1957, 24-year-old Kay (Maloney) Fuller first learns she has an older half-brother. After learning this from her mother, her first instinct is to write to him, and so she does. Doc gets this letter a couple of months after he’s first visited his birth mother, Mary (McManus) Maloney, who is now living in Hamilton, Ontario. Kay, the third-oldest of the nine Maloney children that Pat and Mary have, is nervous about writing and explains her mother’s worries, too, about telling the rest of the children. Here is a .pdf of that letter, which I scanned in for you to read as it was written. 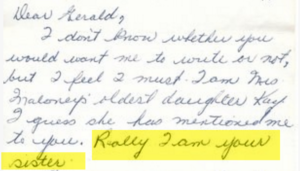 Really I am your sister…

I don’t know whether you would want me to write or not, but I feel I must. I am Mrs. Maloney’s oldest daughter, Kay. I guess she has mentioned me to you. Really, I am your sister.

Mom was over this afternoon to mind the kids for me, as I have a little girl and a boy. When I came home, she was telling me that you had sent her a Christmas present. I asked her who you were, and she told me everything.

Oh, Gerald, you have no idea how shocked and surprised I was. Gee would I ever like to meet you and talk to you. I only wish I knew you better. It is such a sad story. I guess not as much for you as for Mom, because you never knew till a few years ago. But mom carried the secret with her all these years, although she wanted you with her more than anything in the world. She said she never stopped thinking of you, especially on your birthday she would feel so sad, wondering where you were and if you were happy.

This is the first Christmas she got up as early as the kids to open the presents because she knew there was a present from you. She said she didn’t care what it was, just to know you must feel something towards her to be bothered sending something. She loves you so very much. She cried when she told me how she gave you up for adoption, 26 years ago. She said she thinks more of you than the rest of us. I can understand that because I have two children and there is nothing like your first born child.

I know a little how hard it must have been and how hard it was to let you go. She said she can still see you toddling across the street with your little sand pail. She said you were the prettiest baby of all of us and the only one that really looks like her.

I am just so glad you had such a wonderful childhood away from us, and such a wonderful mom and dad, I am so sorry they have both passed away. I am also so happy for mom that you came to see her. You made her so happy. She said she always felt she would see you again sometime. She is such a wonderful mother I hope you think so too, what I mean is I hope you don’t feel too badly towards her for giving you up. She said she was so alone in Canada and with no one to help her or give her advice. She was afraid to tell her father or mother. When you were a year old, she wrote and told her mother. Her mother wrote and told her to give you up for adoption as she told her she couldn’t give you nothing and it wasn’t fair to you not having a real home.

She said she still couldn’t let you go. I guess things got harder on her and finally, when you were a little over two, she signed the papers. She has regretted it ever since.

I cried when she told me, cried because things are as they are, but still I told mom God must have had a reason for things going as they did. But it seems so unfair.

Gerald, there is so much I would like to say to you. I hope you can come back to see us soon. She told my sister Betty about you a few months ago. I am so glad she told me. She wants to tell my older brother, Len. Mom said you met him and his wife, but she doesn’t know how to start, she thinks they might think wrong of her. Leonard is coming down tomorrow night. We are going to a New Year’s party together, so I will tell him then. I know I am glad she told me and I am sure Len would want to know too. I told Betty I was going to write you, she said she wrote you seven pages of a letter, but then she ripped it up. She said she didn’t know whether she should write or not.

Mom told me about Kathy and what a swell girl she is. She wants so much to meet her. So say hello to her from me.

You know I could go on all day writing to you but I had better sign off now as the baby is crying. Mom said you’re not much for writing, but please drop me a few lines. I would like to hear from you.