This is an edited excerpt taken from The Life of Marcella (Connaughty) Gordon (Tales from the Century Club) by Saskatchewan writer, Ken Mitchell.

Marcella Ann Connaughty was born just one day before the birth of what became her home province of Saskatchewan – on September 3, 1905 – in her parents’ home at Medford, Wisconsin.  This American-born pioneer has shown the province leadership ever since, a beacon to her family and was an exemplary member of the Saskatchewan Century Club.

It wasn’t long after Marcella was born that Canada was encouraging immigration through the Homestead Act.  The Luce Land Company of Minneapolis had purchased farmland along the Soo Railroad from Yellow Grass to Rouleau in Saskatchewan.  In 1907, her father bought land near Corinne, just the next town to Wilcox and her parents, Timothy and Carrie Connaughty, moved to Canada.

Chet and His Tractor

Marcella’s older brother Chester (Chet) was fascinated by motors and machinery and by 1910, the family soon had a Rumely steam tractor.  Over the next two years this tractor broke over 20,000 acres of land in the area.  In the fall this tractor was used to power a threshing outfit for the fall’s harvest.  Marcella was not to be outdone and she managed the cook car for 75 days every fall, which meant she was up at 3:30 a.m. to bake bread and prepare the huge meals required by the threshing crew.  Many roasts were prepared each day of the 14 pound size.

After high school, Marcella studied at the Success Business School in Regina and her first job after that was with the Kjellander Seed Company in Wilcox.  The 20’s were good times, the crops were excellent and the young people all gathered to dance in Wilcox on Saturday nights. (Editor’s Note: In the 1920s, it was expected that Wilcox would eventually become at least a large town, if not a city).

Marcella was a thoroughly modern woman long before women began to clamor for equality.  She played hockey, tennis, skated and curled AND drove a car.  She walked with speed and athletic grace and this was her trademark well into her 100th year.

Marcella and Hugh (Hughie) Gordon were married in 1930 and since Hughie wasn’t a Catholic, they had a civil ceremony in Regina.  Although they had no children of their own there was no shortage of youngsters visiting their home. After all, who could resist Marcella’s cooking and Hughie’s stories?

On June 1, 1936 Marcella’s dad died suddenly of a heart attack. His death was followed by some tough years for Carrie and in 1941, she and Marcella’s sister, Joan, moved to Regina.

Hughie passed away in 1976 and Marcella rented out the farm and moved into a mobile home in Wilcox. 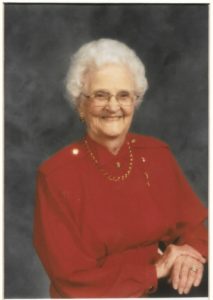 Marcella Gordon on her 100th birthday

This picture was taken on her 100th birthday. What a woman and I am proud to have had her as one of my best friends, EVER.

Turns out, Marcella gets four instalments in the 78 MPH blog, instead of the promised three. Up next, 1976 and the biggest adventure of Marcella’s life… The armed robbery of the Wilcox Credit Union.