Doc’s Mom and Dad almost bought a section of land just outside of Wilcox, Saskatchewan. Even then, as it is now, the farmland around Wilcox is some of the best grain producing land in the country. It was a hard lesson learned to not tell anyone about your plans. It was a close relative who heard of Dr. Joe’s plans, contacted the owner of that Wilcox land and bought it out from under their noses.

But Joe and Bridgetta were bound and determined to own land and bought a section of land just north of Norquay, Saskatchewan, close to where the doctor had his medical practice.  A section of land is 640 acres (or 256 hectares) but this particular land had two creeks running through it and it was hilly.  There was only about 400 acres of land suitable for growing grain.

In fact, that land would have been more suitable for raising livestock but that is a 24 hour 7 days a week operation.  It was not that the O’Sheas were planning to farm this land and it would have been hard to find a renter that would want to raise livestock.  So it was rented out over the years that Joe and Bridgetta were alive.

Harold and Adeline Ferris had been renting the land  for many years when Adeline lost her battle with cancer.  Harold then decided to move to British Columbia to get away from the cold Saskatchewan winters and we were left without a renter for the farm. 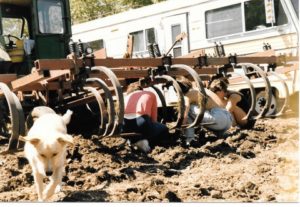 The John Deere, the Triple E, the dog and “gang” changing the shears on the cultivator

Doc thought this would be a good time to try farming for ourselves.  After all, we had these four kids to help and what an experience this would be for all of us! Colleen was keen, too, and she and Doc decided to make it a little joint venture and the two of them went to the bank and got a loan for equipment they needed.

In fact, that year, we had found tenants for the land, but the deal was that we’d participate in the seeding costs, we’d take care of the summerfallowing ourselves, and, at the end of the season, he would harvest the crop and we would split the profits with the tenants. 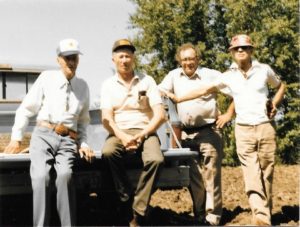 In order to farm anything, one of the first things on your shopping list was a tractor. Doc figured a John Deere 4020 would do just fine, so he asked one of his friends. George Nelson who farmed just north of Wilcox, to track one down for him. George was a farm auction addict and before you knew it, we’d slapped down $8,000 for a green diesel tractor. George and his brother, Corwin, another Wilcox farmer, brought the tractor up to the farm for us on a flatbed, then showed us how to drive it. 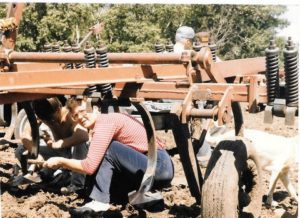 Me behind the tractor

It was pretty obvious right away that Marc had an aptitude for farming. Marc was Colleen’s first husband and he’d worked in Ontario at a tobacco farm for a summer job when he was still a student in Belgium. In fact, he did most of the summerfallowing work. I can’t find it, but I know that somewhere there’s a picture of Marc getting off the tractor at dusk, absolutely covered with black dust.

And you couldn’t farm without having a pickup, and we found one of those, too. It was an International Harvester — Doc called it a “Cornbinder” but for what reason, I’ll never know. It came in handy for hauling supplies around and it was the first vehicle that Bridget drove. She was 12 years old at the time, and spent hours driving up and down the hills of that black summerfallowed land.

And you needed somewhere to stay, and we had that. 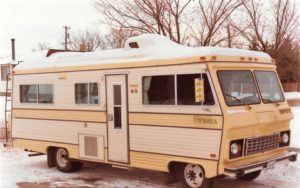 We had a Triple E motor home that we used as a base to work out of.  We’d bought it a couple of years before, as a wreck. It was mostly fibreglass damage that had been sustained, and most of the parts we needed we got directly from the Triple E factory in Winkler, Manitoba.  On the night the Nelson’s brought us the tractor, everyone slept in the “Mo-home”, as Doc called it.

That year, mustard was our crop of choice and we made occasional trips back to the farm over the summer to watch it grow. The first week of September, the mustard was cut and then the rain started. Doc would call the tenants to find out how the weather was, each day at noon, but I’m sure it took a couple of weeks before that crop could be combined. By that time, the pods had started to drop the seeds, and we earned very little from the sale; if I said four thousand dollars, I think that would be an exaggeration. Anyways, by the end of that season, we’d decided farming wasn’t something you could do by halfs. We spent a lot of money and got a very small return.

We sold the 4020, the harrows, the cultivator and the half ton. We’d learned our lesson.