In 1892, my Mom, Judith Theresa Holmlund, was born in Bjurholm, Sweden to Erik August and Emma Holmlund (nee Lundberg). My Dad used to say that he and Mom were the same age: he was born in 1890 and Mom was born in eighteen ninety, too, ha, ha ha! It would always make us kids laugh, we knew she was younger, but, oh how he loved to tease!

Thea, as she was known, was the second of six children, but only four made it past infancy. Her brother, Ezra Amos, was a year old when she was born. Another brother, Gustav Emanuel, came along in 1897 and her sister, Beda Augusta, was born in 1901. 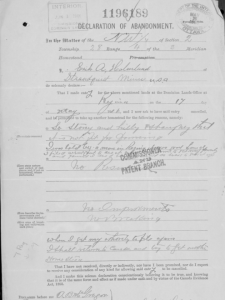 Minnesota was a magnet for Swedes: the Holmlunds had many relatives there when the family emigrated in 1894, homesteading in Strandquist. By the mid-1905’s, everyone was talking about the homesteading opportunities up in Canada, and in May of 1906, my grandfather put a claim on the land located at on the NW 1/4 of 2-28-4 W3rd.

A few days later, Erik was back in Regina to withdraw his claim. The land was too rocky and hilly to farm. If the request was successful, he promised to return to try again.

“When I get my authority to file again, I shall return to Canada and try to get another homestead.”

The next year, the entire family was Saskatchewan bound. After packing up their belongings in Strandquist, they left by train for Hanley: Erik and Emma with Ezra, 16, Thea, 15, Gust, 10 and Beda, 6.

May 24th, 1907, was already a special day for the Holmlunds: it was Erik’s 49th birthday. But when the train pulled into Hanley that afternoon, the family could scarcely believe their eyes. Hanley had been transformed from the booming little town it was into a party town. It was a holiday celebrating Queen Victoria’s birthday. 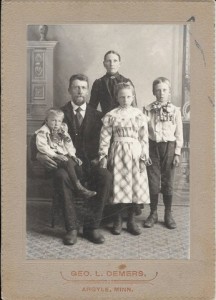 In 1907, Hanley was very much a going concern. As a stop on the CNR, Hanley was home to a hotel that had been purpose-built for settlers coming to look at land to homestead. The folks on reconnaissance missions would be given free board, and a livery was built that let them house their livestock for free as well. As it was such a destination, other services sprung up around it. In its heyday there were 3 grocery stores, a barber shop, a tinsmith and a blacksmith, drug store and lumber yard. And they had an Opera House which had a dance hall, doctor’s offices and meeting rooms for both the Mason’s and the Legion.

Hanley was also the headquarters of the Saskatchewan Valley Land Company, who had built a two-story building on Main Street to help with homesteaders’ inquiries.

Victoria Day is a uniquely Canadian celebration to honour Queen Victoria, who, even though she was dead, replaced by her son, King Edward VII, the Queen had been the reining monarch of the British Empire when Canada became a country in 1867. Everywhere events had been organized to mark the holiday, but Hanley pulled out all the stops to help its citizens celebrate. Since it had been incorporated as a town just the year before, the 1907 Victoria Day was Hanley’s very first opportunity to prove its community spirit on a grand scale.

And prove it, it did.

Dressed up in its absolute best, there were people everywhere, filling into main street for what turned out to be an amazing day, especially for the children. There were ball games going on at the sports grounds, and there were balloons and ice cream for everyone.

God Save the Queen, indeed!