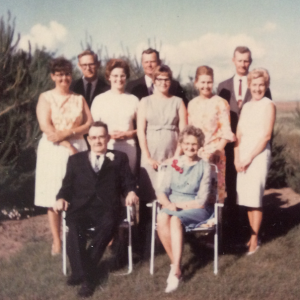 The Funnies would come in the Regina Leader Post in Saturday’s paper and on Sunday morning, on CKCK Radio, there was a show called, “Readling The Funnies!” where they did exactly that. I don’t remember who read them, but it was sponsored by a service station – Fergies Nor-West Gulf, up on Coventry Road in Regina. They read out Peanuts and Blondie and other comic strips and told jokes, and since this post is about funny stories and it’s being published on a Sunday, I’m calling it “The Funnies”!

There are a few funny things I can recall from growing up. These are stories about me and my brothers and sisters: I was the youngest of 10 and as I’ve told you before, we were a big bunch and always had a lot of fun – and even more when our cousins (who were the children of my father’s twin brother and my mother’s sister) came out to play too. I know it sounds quite complicated, but all 21 of us were quickly recognizable as being a Stone, which is my maiden name.

Growing up, we loved to listen to the radio, learning all the words to every song that came on – as did pretty much all the people I knew who grew up in the 1930’s, 1940’s and 1950’s. For your reference, Verna was my oldest sister and Georgie

was my second oldest sister; Marjorie was 8th in the family, my brother Gerald was the 5th and I was the youngest. Verna died from breast cancer when she was just 35 years old; Georgie passed away last year at 96, and Gerald has been gone now for 3 years.  Out of 10 siblings, there are just three of us left: Marjorie, Jim and me. 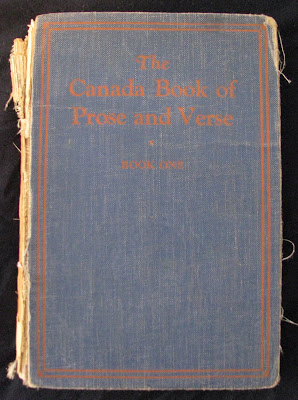 The Canadian Book of Prose and Verse

When Gerald was in elementary school, everyone was talking about a new book that they were going to add to the curriculum at Stafford School. The book was called “The Canada Book of Prose and Verse” but he thought it was “The Canada Book of Frozen Birds”.

He also remembers a song by Creedence Clearwater Revival that had this line, “a bad moon on the rise” and he thought it was “a bathroom on the right”.

I remember a song with the phrase “new mown hay” in it. I thought it was “new monay”. I had no idea what new monay was, but I sang it anyway.

There were birth notices in our local newspaper, The Outlook, every week. One day I saw five announcements, one after another, and each of them began: “Born a baby girl, Ardath” in the paper.

I said to Gerald, “Isn’t it strange that five people all called their baby girls, “Ardath”?

Gerald put me straight: I didn’t know there was a town called Ardath.

Verna was writing down the lyrics to a new song, “Come to me My Melancholy Baby”. She wrote down, “Come to me my melon-coloured baby”.

Marjorie was washing herself and, of course, was naked. Verna’s little boy, Gregory, was probably between two and three years old and came upstairs and saw her and said, “Gee, Auntie Marjorie, do you ever look funny without any shoes on.”

Georgie was getting dressed to go out and her son, Willie, who was perhaps five years old , came in the bedroom and said, “Gee, Mommy, do you ever look nice, but don’t you wish you had a better face?”

In the fall, down in the coulee next to our house, we’d pick rose hips and eat them. If you don’t know what a rose hip is, it’s the fruit from off the wild rose bushes. The inside part is terrible, but the flesh around the berry is delicious by the time they’d get ripened in the fall — and even more delicious after the first frost.

My father smoked, and kept his cigarettes in a large tobacco tin. One day my brother Jim and I, we were quite young, maybe 10 or 11 years old, stole some cigarettes from out of that tin and snuck out into the coulee to smoke them. We got terribly sick and green around the gills. With headaches and both sick to our stomachs, we went home to Mother.

When she asked us what was wrong, we blamed it on the rose hips.

“Strange. You smell much more like Father than rose hips.”