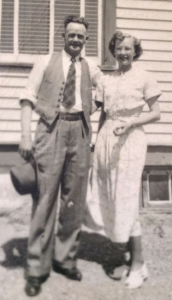 My dad, Peter – who loved to wear a hat – and my oldest sister, Verna

My dad, Peter Stone, was an avid baseball fan.  He was 2 when his family immigrated to the US from Sweden, and 15 when his family re-immigrated to Canada, so, of course, he had played baseball growing up!  There were seven boys in his family, and every single one of them would rather be playing baseball than doing pretty much anything else. They used to say the Stones could field their own team!

My dad’s twin brother, Paul, lived just 1/2 a mile from us, and we had a major rivalry when it came to The World Series.  Our family cheered for the National League and Paul’s family cheered for the American League.  Some of my 9 brothers and sisters were fans of the St. Louis Cardinals, but I was always a fan of the Dodgers. Back then, they were called the Brooklyn Dodgers.

When I was young and it was baseball season, the entire family would be glued to the RADIO in the living room, listening to the play-by-play of the games. Long before television — and even longer before the sports broadcasters used visuals to help explain the game, we would create graphs of our own, to follow all nine innings (and sometimes more!) in a scribbler. Someone would be designated the scorekeeper, tracking the runners, the hits and the outs.  For those of us children still in school, mysterious ailments would inevitably arise, forcing us to stay home when our team made it to the final series.

After I became an adult and the World Series was televised, all of us found it nearly unbelievable that we were finally able to see our favourite players in person!  Although we’d get the newspaper – The Regina Leader-Post – with its pictures of players and coaches, seeing them on television was like a dream come true and, somehow, it made us love them even more.

Loving a team meant swelling with pride when they did well, and living with disappointment when they did not. As a 16-year-old, I first experienced heartache, because of the Dodgers. They led the league by 13 games in August, but lost in a three game series to the New York Giants for the pennant. The Giants, of course, later moved to San Francisco, where they still are.

In ’52, they played with my heart again, this time preventing those nasty Giants from having back-to-back pennant wins, winning the pennant.  That team had some high-powered batters, the likes of Gil Hodges, Jackie Robinson and Duke Snider. Other players I remember were Pee Wee Rese, Billy Cox, Roy Campanella and Carl Erskine. Despite all that batting power, the pennant was all they could muster, as they then lost the World Series to the New York Yankees.

Nineteen fifty-three was another heartbreak year, although the Dodgers’ roster was pretty much the same as it had been in 1952. They posted a winning season of 105-49 but lost the World Series 4 games to 2 and, like the year before, to those damn Yankees.

In 1957, the team moved to Los Angeles where it has continued its history as the Los Angeles Dodgers. Even though there was a romantic attachment to Brooklyn – a part of the greatest city of all, New York City, the Dodgers no longer having “Brooklyn” in front of their name, wasn’t all that disappointing to me. I rather thought their move to L.A. might be better for me — since L.A. is much closer to home and with the greater proximity, I felt my chances of ever being able to see them play in person had just increased.

No, the change of location didn’t bother me very much. What my greatest disappointment was with baseball, and I don’t know when this started, was when players started being traded, and no longer stayed on the same team forever, like they used to back in the 40’s and 50’s. When a player was traded to another team, it felt like a knife had sliced through my heart. A trade, to me, was the great betrayal.

Maureen at the Dodgers’ training camp in 2015 next to the statue of Tommy Lasorda .

Back in Sun City, after the road trip to La Quinta, I had the opportunity to go to the Camelback Ranch, in Glendale, Arizona to watch the L.A. Dodgers in spring training. It’s a state-of-the-art facility that both the Dodgers and the Chicago White Sox use. I was there with my youngest daughter and her family. We stood and watched as the pitchers ran laps around the complex before starting their practice; we sat and watched as the coaches and the pitchers went through their routines.  On leaving the field, the pitching coach gave a baseball to my granddaughter, Lily. He picked her out as she had a pink cast on her leg because of a broken her ankle, which was a very nice gesture.

If the creek don’t rise

Unfortunately, I’ve not made it to a Dodgers game yet, but it is certainly on my bucket list. And, if the creek don’t rise…someday I will go!