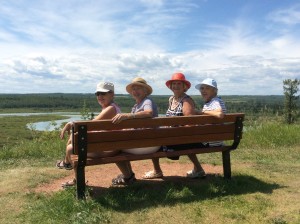 It’s Rita’s birthday! Here in Calgary, the skies are blue and the day was looking great so Ruth, Adele and I were going to help Rita celebrate by having a picnic in the park, followed by a game of bridge.

Ruth and I left our condos at 11:45 am to head up to the Old Banff Coach Road area to rendezvous with Rita and Adele and, from there, we were headed for a picnic in Bowness Park.

Once we got to Bowness Park, we quickly discovered it wasn’t a place that we could really use for our picnic. We hadn’t realized that the flood of 2013 had resulted in so much damage to this side of the Bow River, so we started to think about an alternative location. In fact, if we’d taken a look at the City of Calgary’s website before venturing out, we would have learned that the East side of the park won’t be completely re-opened until the fall.

We could see what looked like a very nice park across the river from the Bowness Park and were considering going there – until we saw the traffic. The cars and trucks were backed up for two kilometres at the place where we needed to go to get across to the other side of the river. It looked like making the crossing would take forever, but for our next picnic we’ll consider going to Baker Park – which is a popular photo shoot location for weddings.

So we thought and discussed alternative plan number three and we agreed to another destination: North Glenmore Park. Back in the cars we got and, believe it or not, with the road construction detours throughout the city, we ended up being back to where we had rendezvoused earlier! After another 6 kms we were at the park. 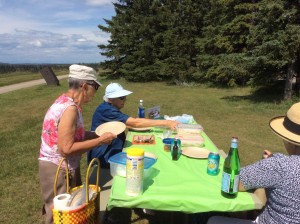 The picnic table will soon have good food to eat.

The parking lots were quite full, but we did find spaces. I’d guess that we weren’t the only ones thinking about having a picnic in the park! But we were lucky to spot a vacant picnic table, so out with the tablecloths and napkins! We were all hungry and ready for our picnic!

Rita had done a great job in bringing all the plates, glasses, cutlery and liquid refreshments. The picnic lunch was a joint effort and on the menu was prosciutto-wrapped asparagus with a yummy sauce, fresh baked bread, roasted peppers, fresh garden tomatoes, devilled eggs, potato salad and fruit. OH what a delicious spread it was! 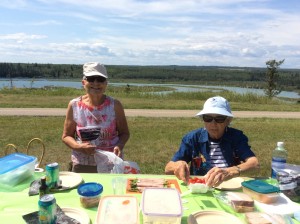 Rita and Adele setting up our picnic feast.

There was a even a beautiful bench on the edge of the Glanmore Reservoir that we could use for picture taking before we got back into the cars back to Ruth’s condo for an afternoon game of bridge.

We played bridge for a couple of hours. Adele and Rita promptly scored the first rubber and Ruth and I finally (and I mean finally) managed to 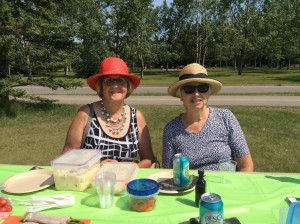 Maureen and Ruth at the picnic.

tie them with a rubber of our own. It took a lot of dealing and throwing in of cards as in most cases nothing seemed to fit.

But what a great way to Celebrate Rita’s birthday.