Escanaba, Michigan is a beautiful place, but it was a serious party town in the 19th century, filled with taverns – and houses of ill-repute. I did a bit of I-sleuthing (looking around on the Internet) and found an article in Genealogy Today by Judy Rosella Edwards that highlights the challenges an enumerator had in fulfilling his census-taking duties. Unfortunately, no date is referenced, but I thought it was a pretty interesting and eye-opening explanation.

The enumerator in Escanaba, Michigan, appeared to have given up on the hope of properly identifying the seven young women living with Robert Palmer, who gave his own occupation as “pimp.” In the end, the enumerator recorded all of the women as prostitutes. As with many women in the trade, they used names ending with “ie.”

In any event, Escanaba is lovely. Located on the Bay du Nocs, the name is one example of the great amount of French and Native American influence in these Northern States – Nocs is a shortened form of “Noquet”, the Native Americans who once lived along the shores of the Bay. As it turns out, we’re headed for a place bearing another French name, Eau Claire, Wisconsin, which translated means “clear water” – but we just don’t know that yet! We have our compass heading West, but where we’ll be staying for the night is still a mystery…

After breakfast we headed out onto #64 West, in the direction of Wisconsin. The sun was shining and the temperature was rising.

Our first stop was a Cenex Gas Station and filled up with gas (@ $2.79 a gallon). Soon we were in a place called Menonemee looking for coffee. I love how the name of the town rolls off your tongue – it’s actually named after a Native American Nation of the same name. A small cafe had an “Open” neon sign flashing, so we stopped in and got two coffees. Soon after Menonemee, we crossed into Wisconsin.

My Theory About Golf Course Food

I have a theory about road trips and golf course food. I’ve rarely had a bad lunch at a golf course, as golfers tend to be choosy and a rather demanding clientele – especially in the US, where I’ve seen golf course kitchens serve a wide variety – from western breakfasts to quick hot dogs, Sunday brunches and Italian-themed dinners. Even though a lot of golf courses are only open in the summer months, especially in the North, they usually have a good cook.  Perhaps not a top chef but, certainly, a good cook – so bacon and eggs or a tuna salad sandwich or a Clubhouse are usually available.

So with this theory of mine in mind, when lunch time was looming and we got hungry, we got Suzy (the GPS lady) to look for the nearest golf course. Turned out, it was a golf course that didn’t have any kitchen staff on till 3:00 p.m.

Time to throw in a sad trombone. Here you go!

We don’t give up easily, however, and for our next stop, Suzy guided us towards the Waseau Country Club. Suzy didn’t tell us in advance that it was a private club, and I guess we could have figured it out from some of the looks we got trying to find our way around the clubhouse. Finally, a member of the kitchen staff told us Waseau Country Club was a members only venue, so we couldn’t have lunch there unless we were members or (met and got invited by one really quickly!)

(All I’ve got to say about our luck with Suzy to this point is that if we were playing baseball, I’d say our luck was running out!) Time for another sad trombone sound (you have to click on the link to hear it!) 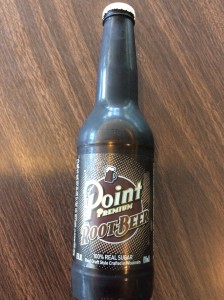 With two strikes behind us, we forged on and Suzy finally directed us to another golf course where they had both kitchen staff and served non-members! We ordered hamburgers and decided to try the local root beer on the menu – Stevens Point Brewery’s Point Premium Rootbeer.  Now the burgers were great, but the rootbeer was absolutely delicious.

Turns out, Stevens Point Brewery is the 5th oldest continuously operating brewery in the USA, located in no other than Stevens Point, Wisconsin. Their rootbeer is made with all natural ingredients (water, honey, vanilla and sugar) and won a gold medal at the 2003 Beverage Testing Institute Awards in Chicago, IL. If you love rootbeer as I do, put Point Premium Rootbeer on your bucket list. And listen up, Stevens Point Brewery! It’s really time to get some more gold medals for your delicious, caffeine-free gourmet sodas. And now that I’ve seen your offerings, I feel rather sad I didn’t get to try your Point Kitty Coctkail – that cherry-ginger combo must be great!

The course we stopped at for lunch was called Pine Valley in Marathon, WI., and in addition to having an open kitchen accessible to the public, they had complimentary Wi-Fi! So I did some surfing while we ate our lunch and found we weren’t far from the Wild Ridge and Mill Run Golf Course in Eau Claire, Wisconsin. Wild Ridge is the championship course, and Mill Ridge is its sister, and the photos they had on their website got us very excited about playing the Wild Ridge course. We decided to call them to see if we could still get an afternoon tee time, and, if we could, we’d see if we could track down a place to stay in the area.

I think we were both suffering from a bit of golf withdrawal since it had been six days since we’ve played (and it’s summer) and maybe it’s a bit silly how quickly we had our hearts set on golfing that championship course. It was no to be, however. Wild Ridge was fully booked but we were told we could play the Mill Run course but only if we started from the 10th tee instead of the 1st. And it would cost us the twilight fee of $35 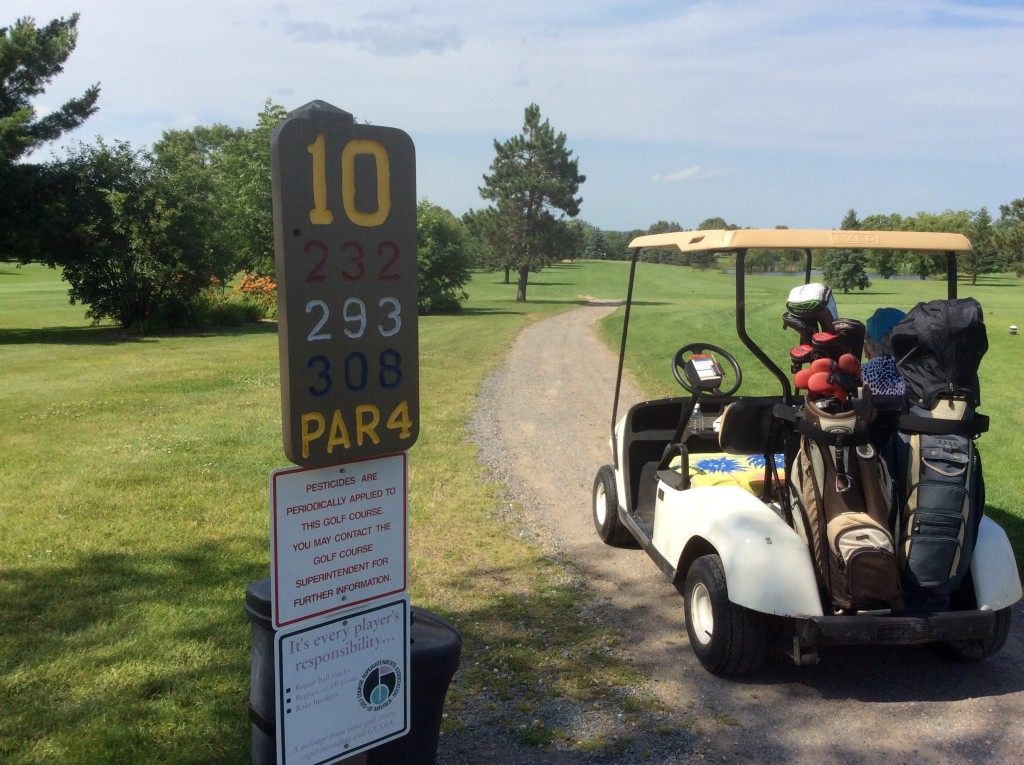 First hole we played (although it was #10) at Mill Run in Eau Claire, WI.

Off, but not running

We agreed, got a tee time and found a hotel in the area and made a reservation. It was very hot but we filled our water bottles and we were off…but not running. We ended up being a twosome behind a foursome of men, with no chance to play through, and the number of times they couldn’t make their tee shots past the forward tees was embarrassing for both of us to watch… 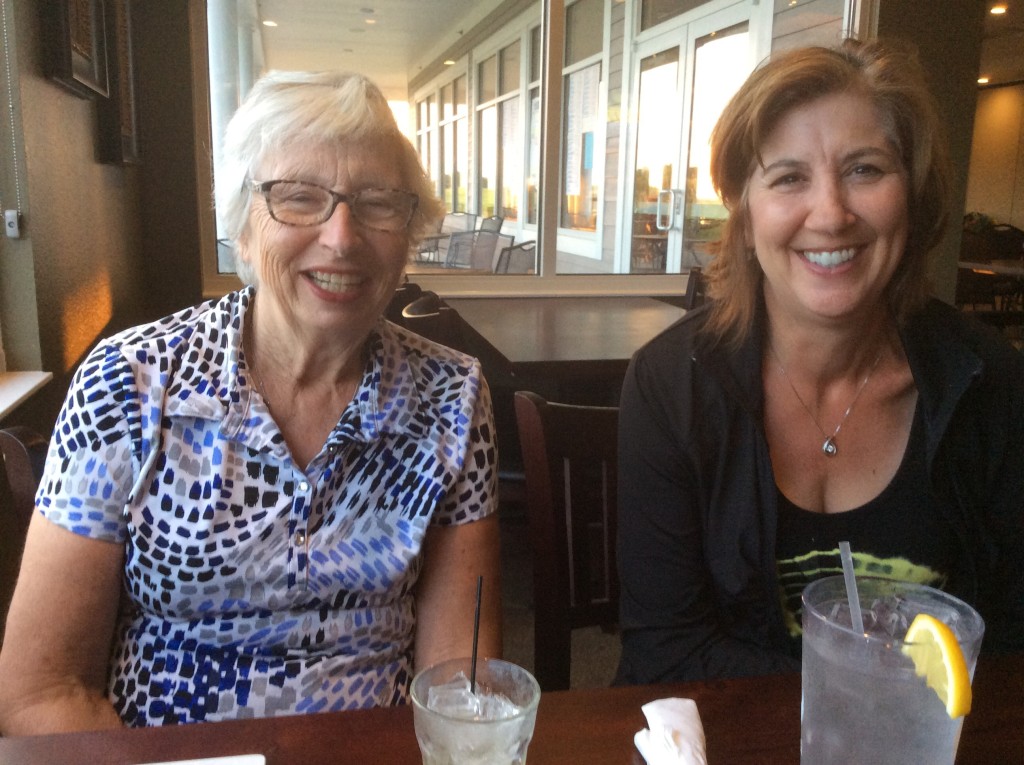 But this story gets only better! As we waited for those men on the 14th teebox, we met another twosome as the 14th was a crossover hole.  We started talking to them, they were local and we told them we were on a road trip going back home to Calgary and next thing you knew, the green was clear and we needed to tee off, but before we did, they asked if they could buy us a beverage when we finished! How nice was that?  They were going to go to the Wild Ridge Bar and Restaurant after their game so when we finished, we went to the Wild Ridge Clubhouse and met up with our new fast friends, Renee and Gary Davis.

What a great way to end a round of golf! We had dinner at the Wild Ridge too and it was great.

We booked a room at the Hampton Inn Eau Claire and I can’t tell you how happy I am to be in this room, with the Hampton Inn’s signature white pillows and comforters. There are many brands of hotels in the Hilton umbrella. I have not tried them all, but I can tell you I love the Hampton Inns.

They are moderately priced – just over $110 for two queens in a non-smoking room – and I love them.  They are clean – always clean – and all the ones I have been in lately have new 18″ mattresses.  The bedding is awesome, all white, and luxurious. I also love the choices in breakfast.  Omelettes, fresh fruit, great coffee. Whenever I’m on a road trip, if I can stay at a Hampton Inn, I will.

Our adventure continues, tomorrow we’ll be headed to Minneapolis, Minnesota!