Wednesday is Ladies Golf Day at the Pinewoods Golf Club in Sauble Beach, Ontario, a golf course close to where Ruth has her cottage.  When we called the clubhouse to ask if we could join the ladies, we were told to be there at 10:00 a.m. and we would be able to play.

Turns out, there were enough women for two foursomes. So Ruth joined one foursome, and I joined the other.

One of the things that keep golfers coming back to play is that one nice shot that finds its way into your round, even when your round isn’t amounting to much. Not only does that one nice shot make up for all the horrible ones you may have on that particular day, it helps you to hold your head high, your shoulders straight back and put a little skip into your step.

Today, my shot of the day was an unlikely blind shot — that worked! It was on the ninth hole; I was 90 yards from the green, but in between me and the pin, was a HUGE cedar.  From where I needed to make my second shot, I couldn’t see the flag through the thickness of the tree, so I had to make the shot on instinct, and believe it (or not) it ended up being just over a foot away from the hole.  E-Z-P-Z par!

Pinewoods is a nice, nine hole course, about 2250 yards long.  I had never seen the course before, so I was not expecting to play great so I was quite surprised when I was low gross of the group! Ruth had a good game too and after our game, we decided to have lunch at the club.  The prices were jaw-dropping! Can you believe a Western sandwich (they don’t call them “Denver’s” here) cost only $5.10? Was it ever good! 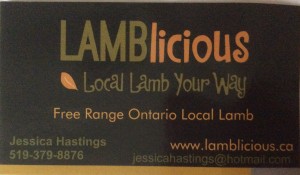 On our way to lunch at the Palmers’ on Tuesday we saw a sign, LAMBLicious, on the highway.  Since both Ruth and I love to eat lamb, we stopped to get some lamb on on our way home.  They were out of lamb chops so we bought lamburgers instead (lamb + burgers)!

These burgers are made with oatmeal, celery seed, garlic, salt and pepper — and lamb, of course. We cooked them on the barbecue after we got home and added some Monterey Jack cheese, fresh tomatoes, mustard and some sliced cucumber for garnish and the burgers were “delicious” — just as advertised! A nice green salad on the side – and a little red wine – made for an awesome dinner.

We are going back for more tomorrow, determined to get there early and get our hands on some of their lamb chops!

We have been getting the cottage into ship shape and have only had a few setbacks so far.  We noticed the toilet wasn’t flushing like it should be, so we got the septic tank pumped out, but that didn’t solve the problem. Next, Ruth called Perry the Plumber and he came out right away and solved the problem. Like they say in plumbing, a straight flush beats a full house, and I don’t think we’ll need to worry about that — or a slowly flushing toilet — anymore!