The one thing you MUST DO in golf has nothing to do with golf. It’s protecting your skin from the sun and Brazilian dermatologist Josanne Bedran agrees.

Today was finally the day for our practice round at Cobble Beach, but no before we picked up some Travel Books from the CAA for our upcoming road trip. 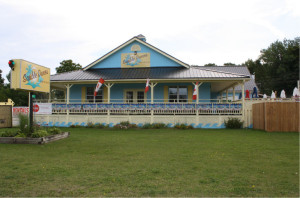 We went to Sauble Dunes Bar & Grill around 10:30 a.m. (to have a coffee and get Internet access) and realized they had their Sunday buffet happening!  We got seats facing the tv so we could watch the golf and we had a really great Sunday brunch!  The lasagna was impressive and eggs, ham, three-bean-salad, croissants, coffee and fresh fruit pretty well made our day.  Oh, and yes, we did have dessert!  I had chocolate cake and Ruth had banana bread – and cinnamon bread! Delicious!

We were standing up to leave when Canadian and Saskatchewan PGA Tour player Graham DeLaet was making a shot so we stopped to watch. On Saturday, he was already in good position to win the Travelers Championship at the TCP River Highlands in Cromwell, CT and were hoping that he’d be taking home the Sunday win. So, as we stopped to watch, there were two young men sitting at the bar watching, too. One of those fellows asked if we had bought our glasses at the same time (they are very similar) and Ruth said that we didn’t even know each other when we purchased our glasses!  He said they were very sharp and mottled! And so the conversation began!

I asked him where he was from and he said just north of Sauble Beach, at Pike Bay.  I told him I was from Saskatchewan and a Saskatchewan Roughrider fan and to which he replied, “You fans are something else!”  I said that’s true, Rider fans are nothing short of rabid.”

We shook hands and he told me his name was Josh and he said he would call me “Mo” (which is my nickname anyways). Then I introduced him to Ruth, and he introduced us to his friend, Ian, who was busy eating chicken wings the size of drumsticks! Soon we were all talking. It seemed to me that Josh has Frank Sinatra-blue eyes – just like Old Blue Eyes himself – and I told him so!  He said he was going to call himself Josh Frank from now on!  I said that Ian had sexy brown eyes and our waitress said I hit the nail on the head – I was so right about their eyes!  Josh said it is so much fun to strike up a conversation with strangers and we couldn’t agree more!  Both guys put my blog on their iPhones and said I had two more followings for sure!

As you probably know, DeLaet didn’t win the championship – it was American Bubba Watson who won in a playoff against Englishman Paul Casey for the win. It was very exciting golf, and for a while it looked like any of the leaders, including Brian Harman, might take the Sunday lead. Anyways, well played, Graham DeLaet, who took home 4th place.

We are back home at the cottage, and have put the heat on.  Sunday was a bit chilly.  Hopefully, it will warm up for tomorrow as we are headed to Cobble Beach for our practice round of golf before the Tournament on Canada Day. Whoohoo! I just know it’s going to be great!

And, BTW, here’s a picture of our “Bobsy Twin” tops that we bought while shopping in Southampton! They’re funky, and oh so nice!

What a beautiful day to wake up in Sauble Beach, near Owen Sound in Ontario.

I woke up with the sun shining through the tall maple tree outside my window.  I stepped onto the patio to check the temperature and it was shorts weather! When I am comfortable in shorts I know it is already +10C or more…I just knew it would be a great day for golf! 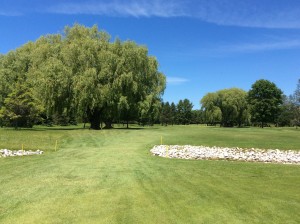 We drove down Highway 13 and Highway 3 to the Saugeen Golf Club – we’d made a reservation to play the nine holes of the Legacy and then nine holes of the Sunset.  They had us down as a twosome – no one had opted to play with us – and for any of you who’ve played on a sunny summer Friday, you’ll know that being a twosome behind foursomes isn’t a heck of a lot of fun. Ruth and I spent a lot of time waiting, we tried to keep each other amused (although, let’s face it, that too gets old!) Finally, on the sixth hole on the back nine the foursome in front of us let us play through. Ruth played her better game on Legacy and I played better on Sunset, so we each had our day! We loved this Stanley Thompson-designed golf course and are very sad to say we most likely will not play it again this year, as our real road trip will begin, in earnest, in just under a week, from Sauble Beach, Ontario to Calgary, Alberta. After our round of golf, we were on to Southampton and back to the shops where I had put a pair of Simon Chang pants on hold – and both of us found a few items we had not seen before! Both L and Co. and Sisters on Huron were happy to slide our cards – and we were happy with our purchases!  Ruth and I bought identical funky tops: bright colours of the rainbow with black inserts on the side.  These are long and look great with a skirt or leggings.  Ruth bought a navy and white classy top as well and I bought a black and white sundress and leggings. The lady at L and Co. was sad to see us leave as we had such a fun time in her store.

At Sisters on Huron, they have a room at the back that is filled with samples.  Now many of you know that samples are what the manufactures make up (mostly in size SMALL) to show prospective shop owners.  Then the owners order what they have seen in the sizes they figure will sell best in their stores.  This entire room is filled with marked-down prices and then everything in this room is on sale at 30% off the lowest price.  There were a lot of extraordinary pieces, such as reversible jackets regularly priced at $300 for around $100.  The sizes may show “S” but they could really be medium or large as these are only samples.  You could spend am hour just in their back room!

We had a light dinner and we’re off to watch some sports at Sauble Dunes, the sports bar.  With the time change from Eastern to Mountain we found that the CFL game was not on here until 9:00 pm.  We decided it would be too late for us to stay for the whole game, so we came home.

One last thing I nearly forgot to mention. Before we left the cottage – which is still for sale, by the way – we made a phone call to Cobble Beach to find out all about their Canada Day Golf Tournament, like I mentioned to you in my last post. They had room for both of us, and made us an offer of a practice round on Monday and the tournament on Wednesday for the price of $175 each. We’re thrilled to be golfing at Cobble Beach and we’ll be golfing with another woman, a club member, for the tournament! They’re also having a Canada Day Party starting at 7:00 pm and we’ll be there – maybe in our matching tops – who knows?! In any event, it’s so exciting and I can’t wait to try out that course!

After our trip towards Owen Sound and the Cobble Beach Golf Club, we went to Wiarton to see Wiarton Willie and then for Red Pepper soup at Dockside Willies.