On Wednesday August 28, 2017, I almost got killed on the golf course.  No, not by rolling the golf car down a hill or drowning in the lake just to the left of the 1st tee box.

It was a golf ball hit directly in my direction by an errant SHANKED hit.  Now this was not from someone on another fairway or the driving range but by a member of the foursome I was playing with!

Now I know better than to be ahead of any person hitting a golf ball.  That is dangerous and you could easily be maimed or even killed by that tiny little golf ball.  You must realize that a golf ball leaving the club of even the slowest, softest blow, can be traveling  very fast. 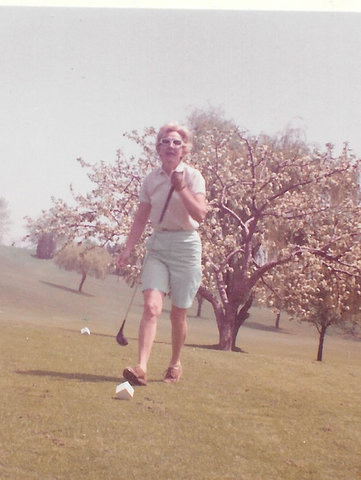 My sister Georgie who just hit another perfect drive down the fairway.

These errant shots happen more often than you would expect.  Just this past Monday I was playing Bridge with my friends and mentioned that I was writing this story. I couldnt believe the coincidence but one of the ladies told me her husband had been hit last week by a golf ball. It hit him on his arm and of course it was still sore.  The ball, also, came from one of his playing partners.  SHANKED out of the rough.

You all have no idea how scared I was when I saw this ball coming toward me.  I had no time to “have my life flash before me” or actually think.  I just tried to move quickly out of the line of fire that this golf ball was traveling.

Of course my first reaction was to say “ I’m fine” but in fact I really wasn’t. I was a bit dizzy and had to stay sitting on the ground for a few minutes until I was sure nothing was broken.  My biggest concern, stupidly, was to check back the fairway to make sure we weren’t slowing the play of other golfers.  (It is a habit of mine for all the years I’ve golfed to play to make sure to NOT hold up the players behind me…but I checked and there was NO ONE behind us!)

Afer a few minutes I was ready to hit my next shot and we all resumed play.

I must admit that it was a shock to my system and it wasn’t until several holes later that I really felt OK.

1. Never, ever, go ahead of any ball to be played.  Even a Pro can shank a ball.

2. Never, ever,  hit a ball with someone ahead of you.