The LPGA (Ladies Professional Golf Association) was playing at the Wildfire Golf Club in the Scottsdale area of Phoenix, AZ on March 15-18.  I was down in the Greater Phoenix area, visiting with my friend Ruth at Sun City, and I asked Ruth if she would be interested in watching play on March 16th, which, as it happened, was the very next day! Ruth said YES! We actually had talked about going last year and didn’t go, so we agreed that we definitely should go this year. You snooze you lose, right?

Our plan was to arrive at the course when Brooke Henderson (our Canadian PHENOM) was making the turn, as she was starting that day at 8:00 a.m. There was no way we could be there for her first nine holes. We thought it would take about an hour on the freeway (Highway 101) so we left home around 9:00 a.m., figuring Brooke would be be on the 10th hole around 10:00 a.m. and we could see her then.

The sign for LPGA Parking was about 400 yards from the exit onto Tatum, which we took. However there was no sign saying left — or right — to the Parking! Of course (or should I say “off course”!) we turned left when we should have turned right….traffic guides gave us a map and, sure enough, we needed to make a U-Turn. Soon we were at the designated parking. 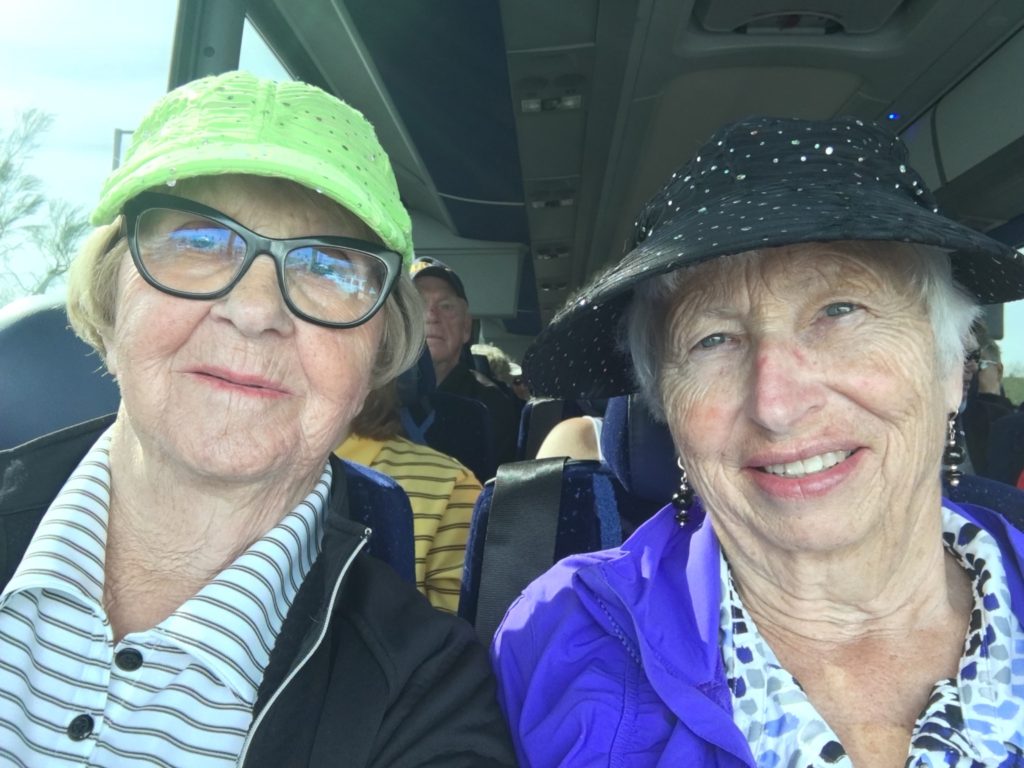 A BIG BUS, complete with air conditioning took us to the gate and, $27 later, we were at the 10th tee box to see Michele Wie’s foursome tee off.  Next was Brooke Henderson, Christie Kerr and JinYoung Ko. 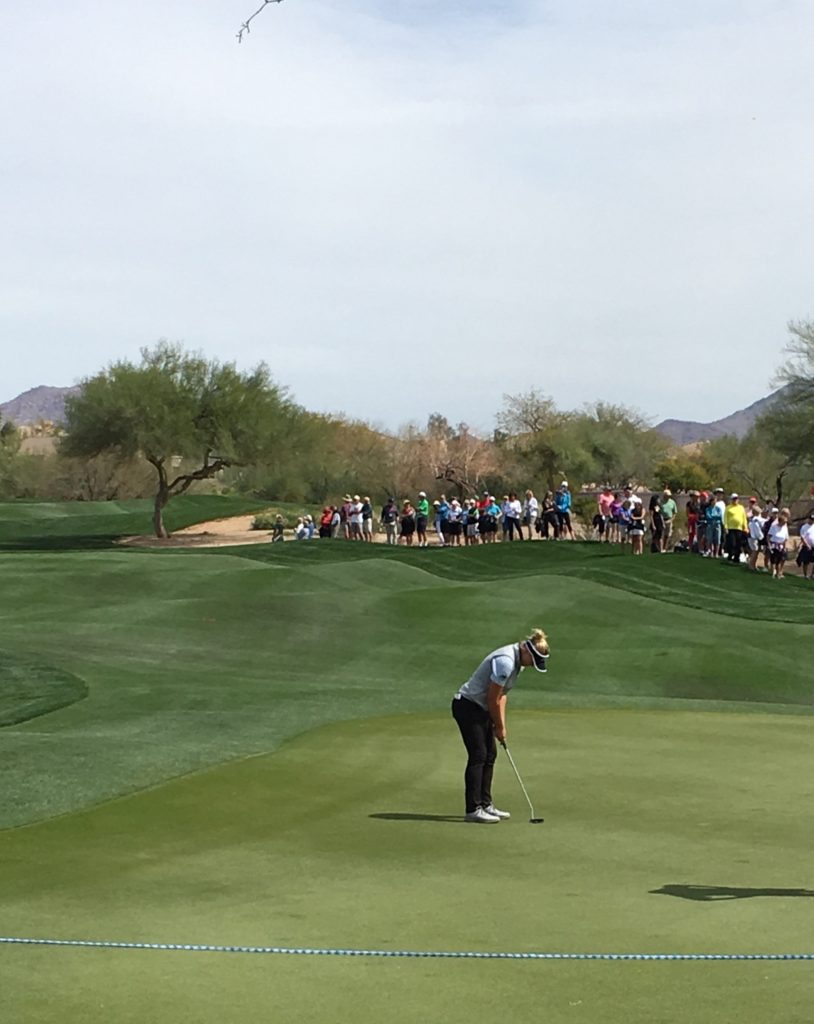 Brooke, with her long PING driver, certainly had the longest drive. And her second shot was closest to the pin on the green. However, she missed ther birdie putt, but still made par.

Along with a large crowd, we walked with this foursome and watched their shots through Hole #3 and then we crossed over to watch the pairings come through on Hole #16 until Brooke’s foursome came. We then followed them through Hole #18. There were many pars on her scorecard, but Brooke came up short on the birdies so, unfortunately, she missed the cut.

Hunger had set in by this time so we searched out the food tents and soon we had Cokes and Hot Dogs. Well I had one but Ruth had a bratwurst! Delicious!

We were headed for the bus when I noticed there were several players that had not started and they were putting on the putting green. And there was Paula Creamer and she was talking to someone. Even though her back was towards me, I knew right away it was Nancy Lopez. I always admired Nancy when she was playing on the LPGA Tour. She always played her hardest and found ways to smile, even in defeat. In fact, one of the first tips I ever heard about putting came from Nancy. She said she always tried to hit her first putt 11 inches past the cup. This made the next putt easy as a “tap in”. Whenever I remember to use her tip, it really does work!

I walked over to where Nancy was coming from the putting area and several people asked her if they could have their picture taken with her and I joined the group. Of course Nancy obliged. 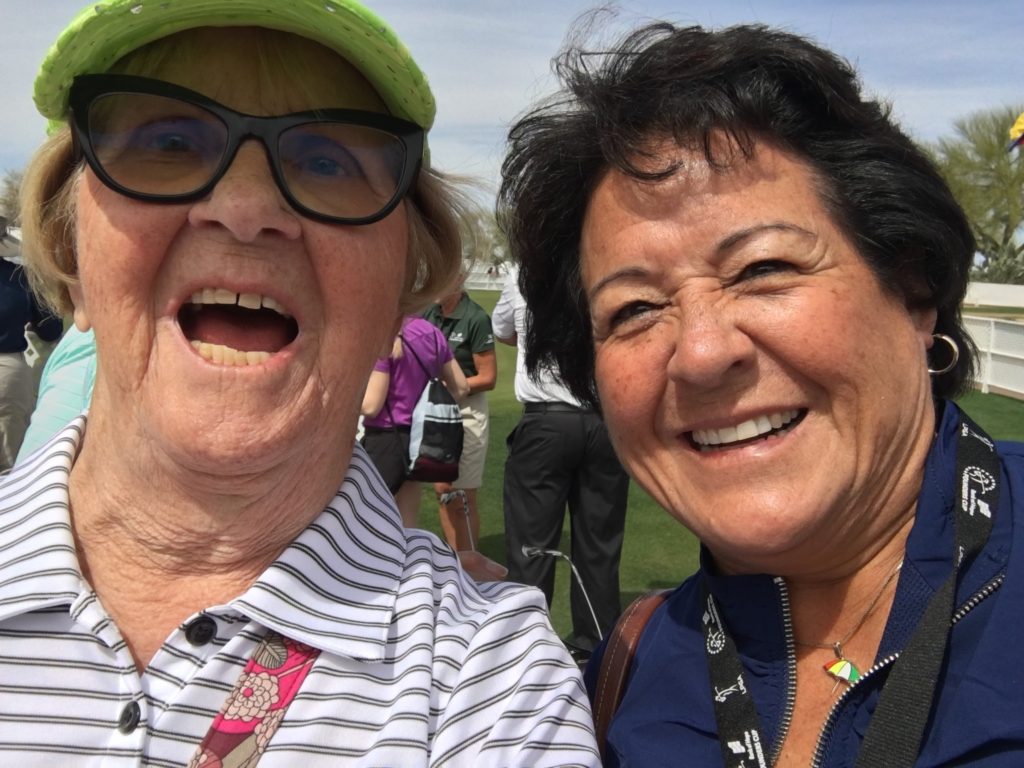 This picture says it all…I was in awe when Nancy Lopez said she would love to be in a picture with me.

Then we went off to the Wildfire Pro Shop to check out the stock in Ladies Golf. There were some some really nice “Greg Norman” skorts and tops and even some “Loudmouth” too. It seemed we were the designated looky-loo’s — there would be no buying for us today.

Soon we were home and had to get ready to go for dinner and Bridge at Joan and Bill Bulmer’s.  Joan blew us away with a wonderful meal of rack of lamb. Bill and I got the best cards at Bridge that night.

Brooke and Nancy in one day. A special time to remember.