Lisa and I were on the way to Torrey Pines early Monday morning. We made one stop at Starbucks for coffee down the street (they open at 4:30 a.m.). We had only a few miles on I-15 and as far as I have seen there is no time that it isn’t RUSH HOUR along this interstate highway. There are now five lanes in each direction: one lane is the HOV lane. We then took Highway 56 and even had a merge with I-5 and immediately we were at Torrey Pines Golf Course. By this time it was 6:10 a.m. And it was still dark!

We knew the procedure for walk-up tee times before the regular tee time. Luckily there were a couple of guys heading towards a building with a lighted walkway. We followed after them carrying my clubs.  Up the stairs and straight ahead of us was a lighted ticket booth. To the left was a queue of about 20 guys and their clubs were lined up beside the deck railing. 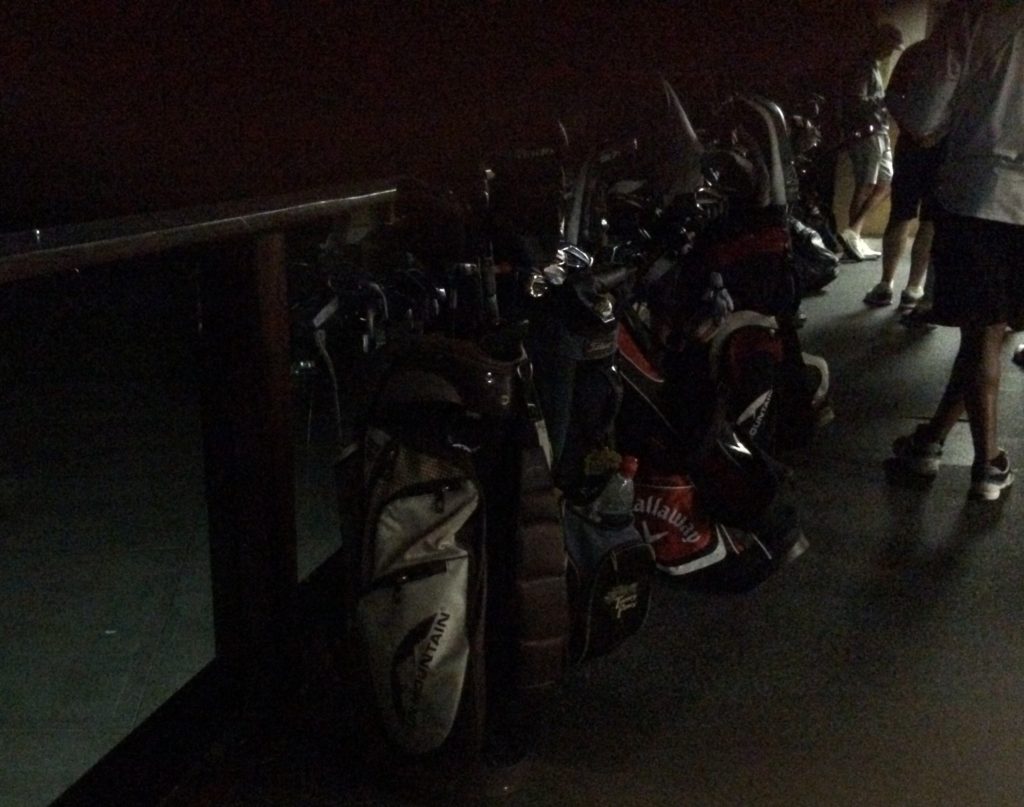 Golf clubs must be with you in line! It was very dark.

I put my clubs down and took my place in line.  Lisa stayed with me and by 6:35 a.m. I was purchasing my green fee for the South Course. I stopped in the Pro Shop to rent a power golf car and was on my way down to the 1st tee.

I met my playing partners, Carl, Chris and Carter. Carl and Chris were USA residents and Carter was from Ottawa, ON. Right away Carter and I were talking Ottawa Redblacks vs Saskatchewan Roughriders. 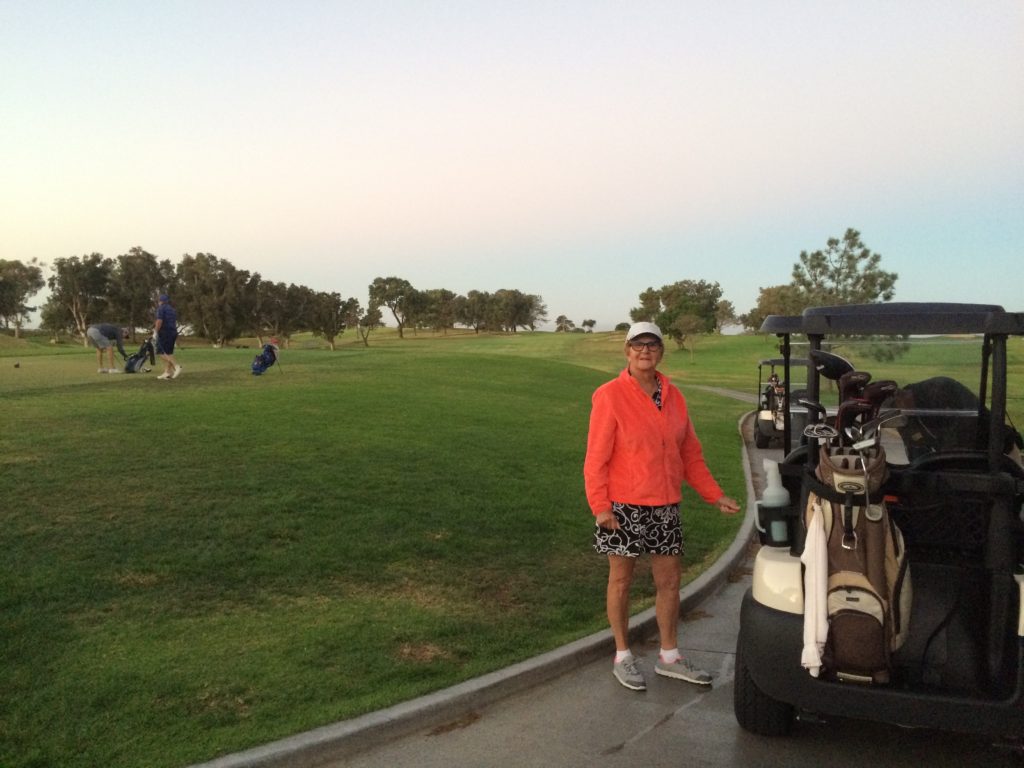 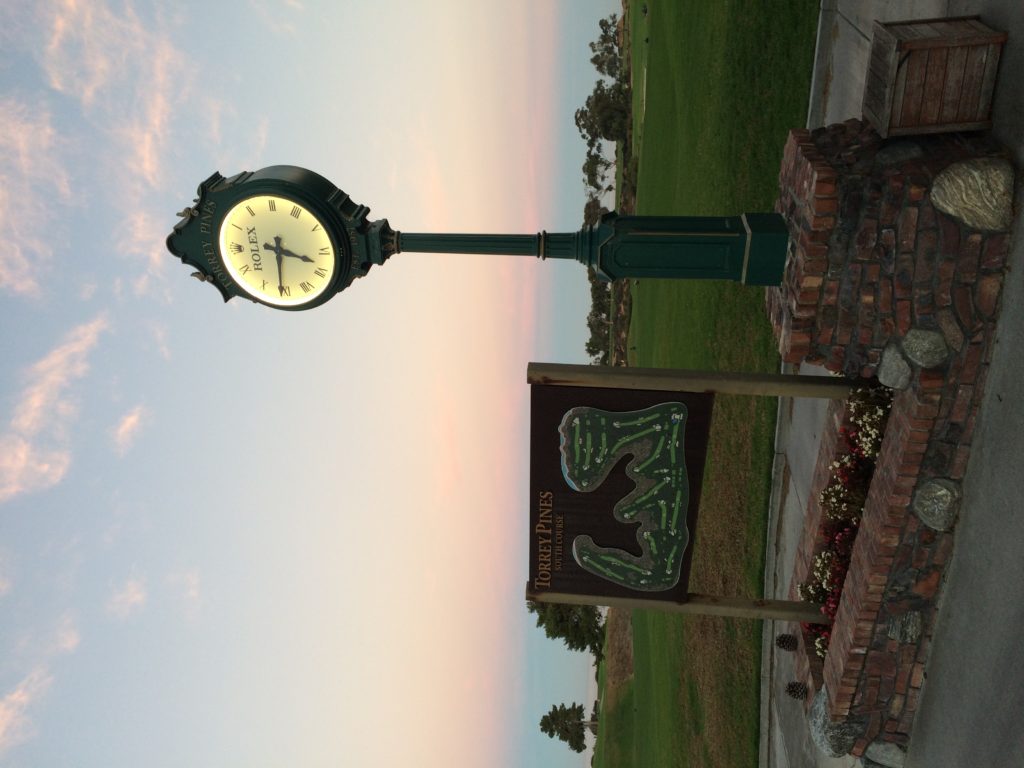 Our tee time was 6:48 a.m. and it was still pretty dark when we hit our first shots.  By the second hole we had a beautiful sunrise and it was bright and clear. There was not a breath of wind the entire round. The only defense for the course is the very deep bunkers surrounding the greens. There are also a few strategically placed bunkers on the dog-legs of the Par 4’s. Bye the way the greens were setup as though the US Open was on and were ghastly tricky especially around the cup!

I was a bit nervous trying to play my best and all the while trying to appreciate the breathtaking views. There was no GPS on the golf car and no restrictions for driving (except of course the Par 3’s) but I was alone on my car so it made for a lot of juggling and walking to get to the greens.  Carl and Chris were riding a golf car and often one of them would take my car to the green for me.

We had a lot of fun on the course.  Carter and Carl were long drivers of the ball and Chris and I were not so long. I do believe Carter shot 69 and I do believe he had never played the course before! It was a joy to watch him golf.

Lisa went for a walk along the beach and logged four miles. The beach is shaded by the cliffs to the east so she wasn’t in the sun for her walk, Our timing was great and she was waiting for me at the 18th hole. By then it was just after 11:00 a.m. We took a bit of a drive along the ocean and were back at her neighborhood Nordstrom’s Cafe for lunch. 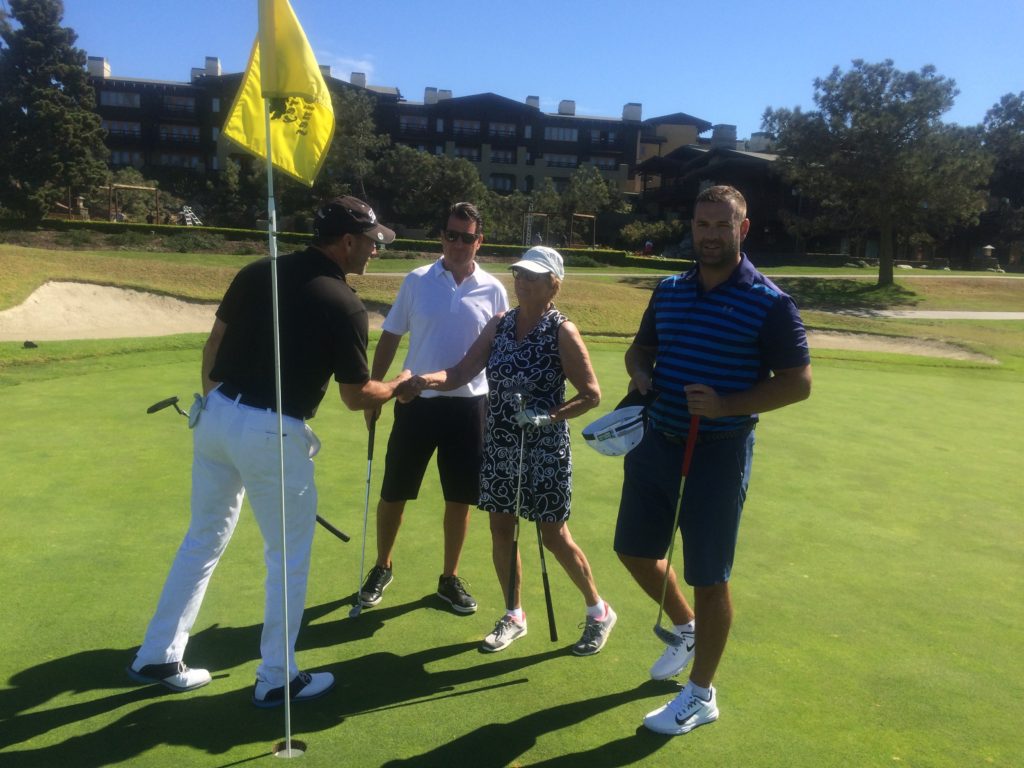 Carl, Chris, Me and Carter

Thanks to everyone I had a perfect day.