Peachy! Pretty as a peach! Don’t you just love peaches?

I love peaches and when peaches are in season, I think about the days when I was golfing in Regina, and a story my sister Georgie told me about peaches for breakfast.

It began when I was on the Regina City Ladies Golf Championship Committee with Jean Owen and when I think of her, I think of peach pie! And the other way around! We had a meeting a her house and the moment she opened the front door to let us in, I could smell the aroma of fresh peach pie which was offered to all of us.

You know how some people are:

“I had dessert before I left home.”

“I just lost five pounds and I won’t have even a teeny piece.”

Words like that may have left others’ mouths, but NOT MINE.

When you have that first small bite, you know it may just be the best piece of pie you’ve ever had. The peaches so soft and warm and slippery and the pie crust sooooo flaky, you can almost taste the butter.

Of course I had two pieces!

Here in Western Canada, the best peaches come from British Columbia. When the B.C. peaches were ripe this year, I thought of Jean and just had to make peach pies. The Lions Club has a Farmers Market every Sunday during the summer just off Highway 1A west of Calgary. I went to this market often as it was close to where I used to live. I knew they would have the “freestone” peaches at one of the stands. So off to the market I went (twice) and along with fresh vegetables I bought the peaches.

Pillsbury Pie Crusts – Find these in the dairy section

You may still go through the process of making the pie crust from scratch but I let Pillsbury do the work for me!

Directions
* Preheat the oven to 450 degrees F (220 degrees C).
* Line the bottom and sides of a 9 inch pie plate with one of the pie crusts. Brush with some of the beaten egg to keep the dough from becoming soggy later.
* Place the sliced peaches in a large bowl, and sprinkle with lemon juice. Mix gently. In a separate bowl, mix together the flour, sugar, cinnamon, nutmeg and salt. Pour over the peaches, and mix gently. Pour into the pie crust, and dot with butter. Cover with the other pie crust, and fold the edges under. Flute the edges to seal or press the edges with the tines of a fork dipped in egg. Brush the remaining egg over the top crust. Cut several slits in the top crust to vent steam.
* Bake for 10 minutes in the preheated oven, then reduce the heat to 350 degrees F (175 degrees C) and bake for an additional 30 to 35 minutes, until the crust is brown and the juice begins to bubble through the vents. If the edges brown to fast, cover them with strips of aluminum foil about halfway through baking. Cool before serving. Peach pie tastes better warm than hot. 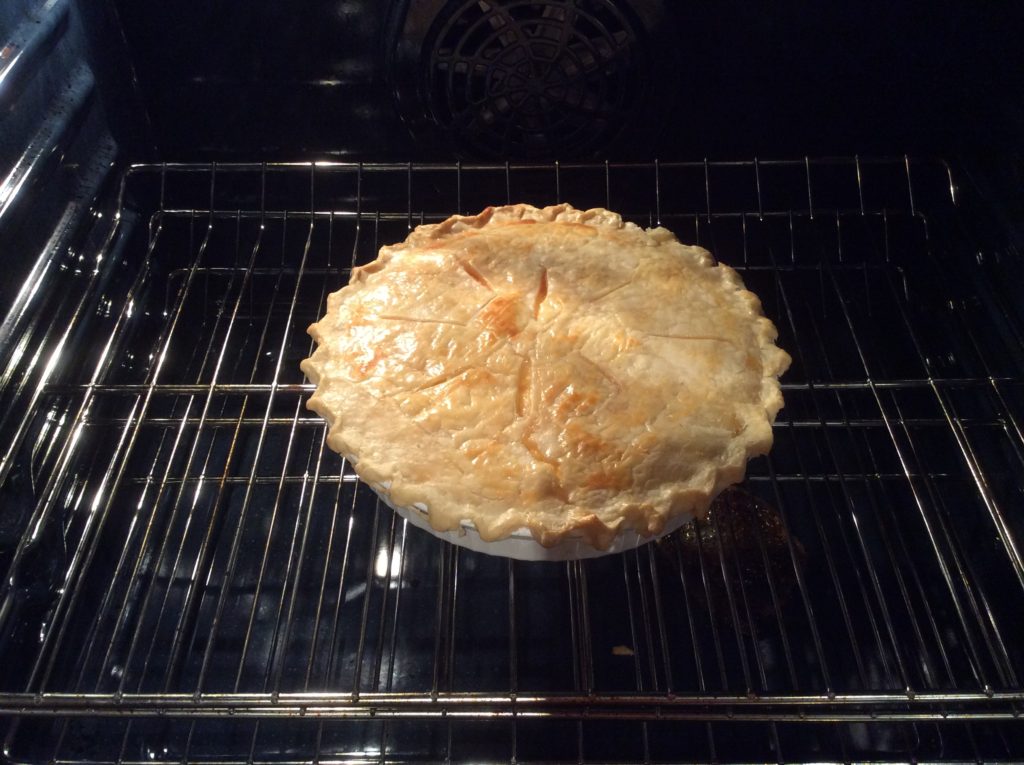 Peach pie ready to come out of the oven!

Then I found a site called Worthy Pies You Can Do at Home that had ways to decorate pie crusts. 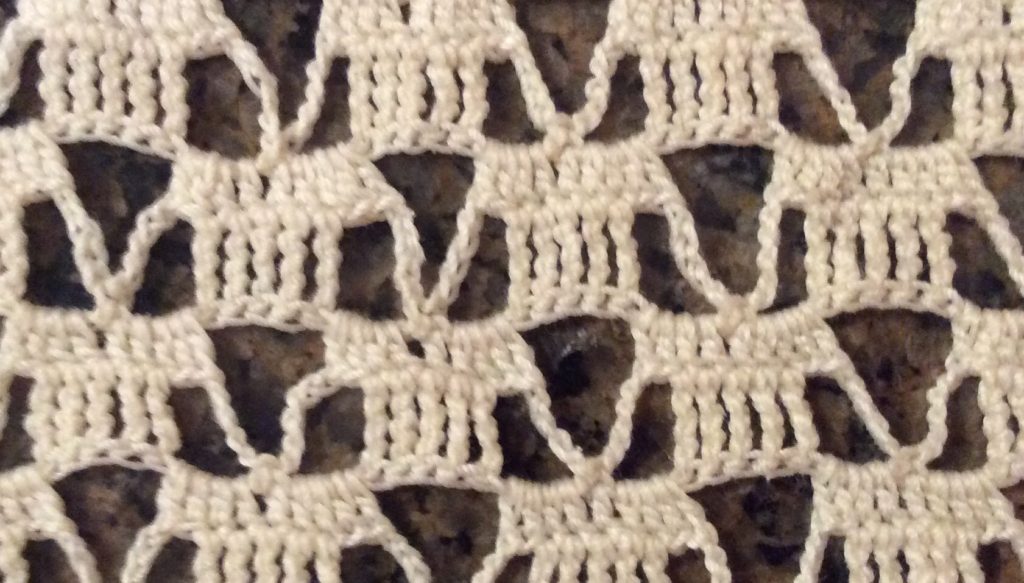 A portion of the crotcheted place map from Georgie

The first picture is of a crocheted place mat I received from my sister Georgie. I put the place mat on top of the pie crust and rolled with my rolling pin till the pattern was embedded. Second picture is final result. 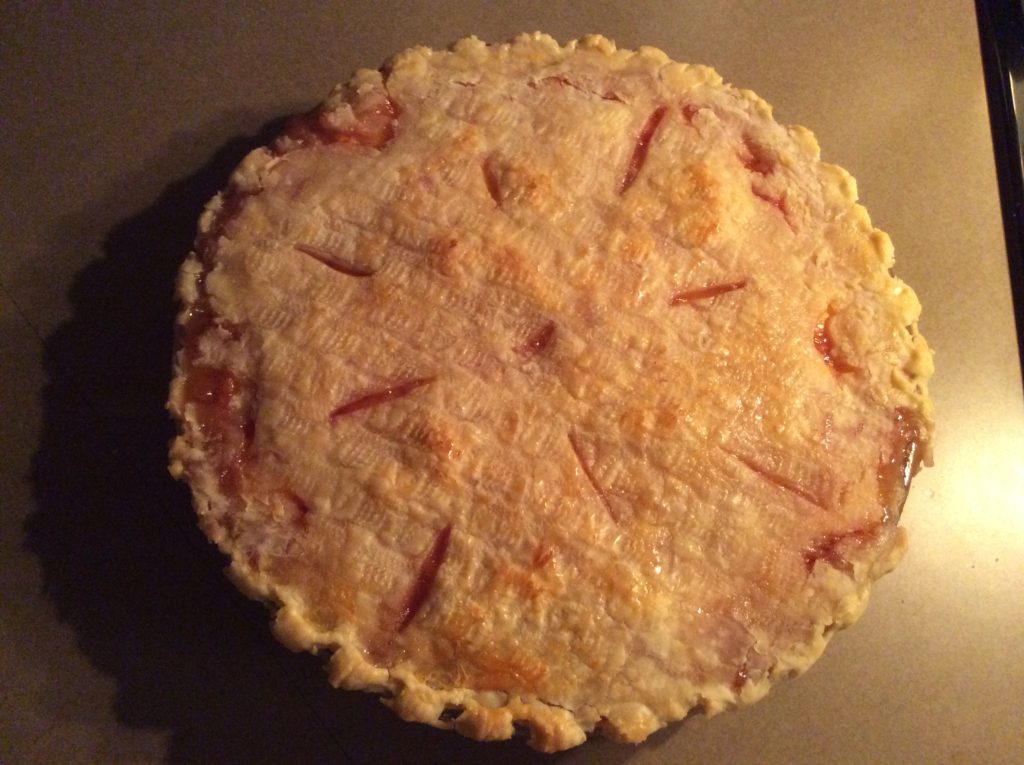 Now you are wondering what does this have to do with Single Malt Scotch? Well I have another story.

Georgie told me that back in her early days of marriage they had a house on Haddon Avenue in Hamilton, Ontario and in the back yard, they had peach trees. Georgie had a friend from her early years as a “hired girl” (what we would call a nanny or housekeeper) in Stranraer, Saskatchewan. Holly was quite worldly, had been married three times, and been around the block several times. She came to visit Georgie overnight once and in the morning, still in her pajamas, she said she was going out to pick us some breakfast.

In she came with two peaches that she took off the skins, asking Georgie if she had a couple of crystal fruit nappies she could use.

Holly sliced the peaches thinly into the bowls and now told Georgie the only thing missing was sone Single Malt Scotch!

Georgie produced her finest bottle. Holly poured the Scotch over the peaches and then sprinkled a small spoonful of white sugar over the top. Georgie often talked about peaches for breakfast. All I’ve got to say is that seems like quite the way of starting the day! 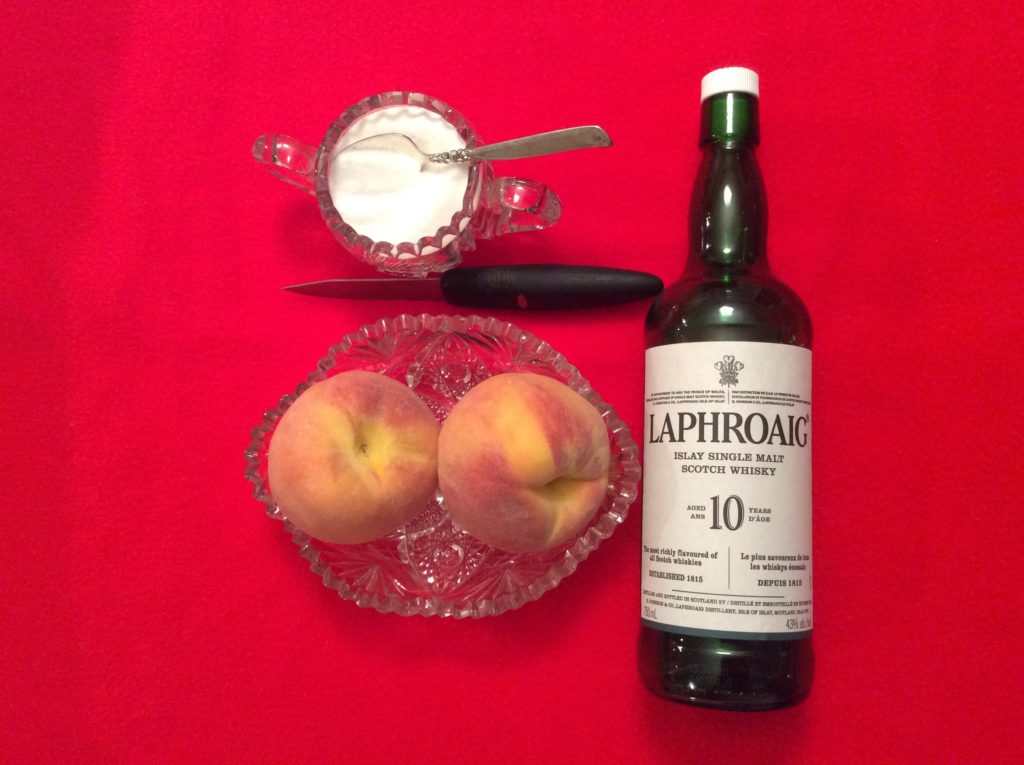 Everything you need for a Peach Single Malt Breakfast