The very first Canadian Western Agribition (CWA) was held in November, 1971 in Regina, Saskatchewan. Incredibly, up until then, the only livestock show in Canada was the Royal Agricultural Winter Fair in Toronto. Western cattle breeders found it was very costly and hard on the animals to have them hauled by truck or train from the prairies to Toronto and have them cared for by a herdsman for about a 21-day, round trip. A bit closer to home, depending on where you lived, was the National Western Stock Show down in Denver. But many wondered, “why not a show in Western Canada?” One of those dreamers was Saskatchewan rancher, Chris Sutter.

Chris Sutter owned the Aqua Hollow Hereford Ranch down in Redvers, Saskatchewan where he had a fine herd of cattle. He eventually took his Herefords to shows all around the world, but back in 1957, he got his first taste at winning big. One of his Polled Herefords was the first female to ever win the grand championship in open competition at the Royal Winter. After that, he yearned for a show closer to home.

Sutter, with another Redvers cattle rancher, Jim Lewthwaite, put their heads together and started the groundwork for the Canadian Western Agribition.

As soon as word got out that a show was being organized in Regina, it wasn’t hard to get all the different livestock associations to throw their support. Now, that wasn’t as easy as you might think it should be. All these different breeders — of Herefords, Limousin, Aberdeen Angus, Simmental, Beefalo — the list goes on and on and on — they may have all been breeding beef cattle, but their pride in their breed was as strong as supporting the American League or National League in baseball! Getting them all to agree on a show was a real feather in the hat (and that hat was a Stetson, thank you very much!)

Of course, today the Agribition is a huge success. The show is still anchored by beef cattle but includes dairy cattle too, horses, bison, sheep, goats, and an extensive agribusiness trade showcase. It attracts hundreds of thousands of visitors from all over the world, every year. 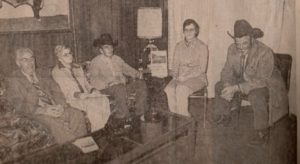 And so it was, in year two of the Agribition that I became one of what were just three employees. Alex McTaggart had just been hired as General Manager and Marg Jermyn was his assistant. Marg and I had worked together at the LIFT program and she was the one who brought me in. I was the accounting clerk.

You can’t imagine how hectic the show was for us for the 10-12 days that it was on, but it was the best kind of excitement I’ve ever known in a job. We worked from early, early morning until after way after midnight out of a converted trailer that was parked in one of the barns. Of course, we had no computers back then and show and sales results were done with “stencils”. How antiquated that seems now! Mistakes were often made and the correction fluid poured! And although I was more of an accountant than a typist, type away I did — all those entries, pedigrees, sales prices — I sure had nimble fingers back then.

The older children from both Marg’s and my family were also recruited to help. Each animal on exhibition needed a sign in their stall, displaying their name, their owner, their sire and dam and for each of these signs, we paid what seemed to them a princely sum of 25 cents. With long names and no possibility of correcting the permanent marker on the cards, penmanship was important and so was attention to detail. 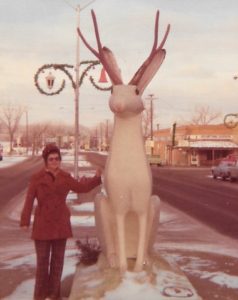 Maureen O’Shea with the Jackalope statue in Douglas, WY on our way to the National Western Stock Show in Denver, CO

The second year I worked there, Alex and Mrs. McTaggart, Marg Jermyn and went down to make a tour of the stock show in Denver. I remember the trip: it was certainly one cold January. 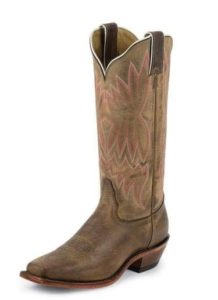 This boot is similar to the ones I had in the 1970’s. Photo courtesy of Tony Lama

We stopped in Cheyenne, WY at a western clothing store and I bought a pair of Tony Lama cowboy boots. They were and the most comfortable footwear I ever put on my feet. The softest leather lining and the most beautiful leather outside. I wore them all five years I worked at the CWA and it’s true: you can stand all day in good boots.

Out in the barns, a great deal of preparation was going into readying the animals for presentation in the show and sale rings. Many of us had never imagined the amount of washing, brushing and drying that went on to get these animals ready. In fact, it would rank right up there with the best hair salon you could imagine, at least back then. These were the days of hair dryers, not blow dryers, but some of the more clever exhibitors had rigged up vacuum cleaners so they would blow air, not suck it in, to dry the animal’s hair. As for how they dressed, well it was quite like you’d see in the movies. Plaid shirts with mother-of-pearl snap buttons, Lee or Levis jeans, cowboy hats — and boots — wonderful, wonderful cowboy boots.

I have often said that people who care for animals 24/7 are some of the nicest people in the world, and they take a lot of PRIDE in what they do. During Agribition week, the weather outside might have been cold, cold, cold, but inside the barns, the animals kept things warm. And the sales prices kept the whole place buzzing with excitement. It was a great place to work.