AKA Ahhhh, the life of a dog…

I woke up this morning and knew for sure – but I had known last night that they were GOING! Going where I didn’t know and I really didn’t care. I knew I wasn’t going with them because they didn’t load my dog food in the car or 1/2 Ton. I think they thought they were fooling me because there was no luggage by the front door. I saw them take the luggage, well most of it, to the 1/2 Ton parked in the garage.

It was no surprise to me when Grammo came in the front door just after 5:00 a.m. And as much as I like her I was still pretty sad that I was being left behind. Grammo is pretty good, well I suppose I could say she’s great. I mean she doesn’t have a MEAN bone in her body. That is if she has bones in her body, I don’t know. I do know she doesn’t take me for walks. She never has anyway and that’s what I miss the most when I’m left alone with her. One time she was here Bridget’s friend came with her dog to take me for walks. That was so much fun with Duke, a Border Collie, but he really liked to barrel his way on the path trying to get ahead of me.

By 6:00 a.m. I curled up in the leather chair to have my “coffee” and watch the news on TV? Just kidding about the coffee. I just pretend I’m having coffee because Bridget has made herself a mug. You know how I like to do the same thing Bridget does.

Grammo is dog sitting another dog as well as me.  Her name is Nellie. I’ve  got to tell you about Nellie. She used to be a lot of fun but she has taken to sleeping most of the time. Maybe she is just missing her family. I heard they went away to a place far, far away where they lost a lot of balls. I love chasing balls and bringing them back. I am a Retriever, after all. And so is Nellie. I hope they didn’t lose all the balls. I need to go and look for mine.

After “The Price is Right” is over on TV I think I’ll go curl up on the window seat and watch for my family to come home. Soon I hope.

Grammo went out for dinner around 5:30 p.m. last night. After she fed Nellie and me. She let us out to do our thing and picked up after us before she left. I think Grammo was pretty tired when she came home around 8:00 p.m. By 9:30 she was ready for bed and I guess I woke her up a few minutes later. I charged out of the master bedroom barking as loud as I could because I heard a strange noise. Grammo came to the bonus room and looked out the windows and said everything was ok so I curled up on the floor by the bed and went to sleep. 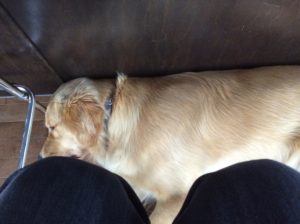 I am tucked under Grammo’s stool when she is writing on her IPad. Those are her knees!

There is nothing happening here today. I sure miss my family. Nellie just sleeps and Grammo is watching golf on TV. I will lie down under her stool so I’m not too lonesome.

Grammo and I went downstairs after lunch and let Nellie out for awhile. She does her thing and immediately wants to come back in. I like to roll around in the grass for awhile but not Nellie. She wants to come in. So Grammo and I took her upstairs. She is pretty slow on the stairs and is really puffing by the time she gets to the top! She had a drink of water and curled up on the rug in front of the couch.

Soon there was a knock I on the door and I ran to see who was there. It was Anne and Bob and they had come for their dog. They talked to Grammo for awhile and then they left with Nellie.

Friday – Where is the KitchenAid Mixer? 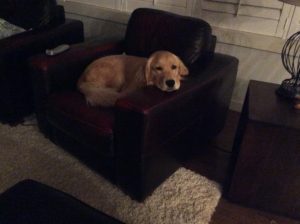 Grammo is an early riser. I had breakfast before 7:00 a.m. And that OK with me. Grammo watched some golf on TV and then she got the Kitchen Aid Mixer out of the cupboard. That was after she looked and looked for it! She opened every door in the lower cupboards and checked the pantry too. Finally I heard her cheering because she found it. Then she made cookies. I know they were cookies because I found a bit of flour on the floor in front of the stove. I could smell them when they were in the oven. Grammo tried two as soon as they cooled. I think she likes them. She didn’t give me any but Grammo gives me only dog food. Oh and a treat once in awhile.

Saturday was so exciting. Kirsten came and took me for a walk. Oh, that was so much fun. She didn’t have Duke with her and I miss him. But I was so happy to be outside for a long, long walk. I was really wet when we finished.

Grammo made cookies again. This time, peanut butter. I know because I saw the Kraft Smooth jar when she took it out of the cupboard. Boy did they ever smell good when they were baking. The whole kitchen smelled so yummy.

Grammo watched golf, football, hockey and baseball. She LOVES watching sports I can see that.

Grammo was telling me about my cousin Lola. Lola is Grammo’s daughter Colleen’s dog. She’s a German Shorthaired Pointer and points for birds like partridges. I wonder if they are in pear trees? I hear that Lola eats blueberries right off the bushes where she lives. I guess she really likes blueberries, and raspberries and even teeny tiny wild strawberries. I’ve never tasted them! Colleen says that Lola is learning to talk, the same as Yardley (Colleen’s former Jack Russell Terrier) did. I don’t know anything about talking. Sounds sort of strange if you ask me.

Grammo went home around 6:00 p.m. And that left me alone. I’m not scared to be alone.
I was sleeping when I heard a key in the door…

Woohoo. It was my family.

I AM SO HAPPY TO SEE MY FAMILY. They’re all back, safe and sound.