To those of you who truly love golf I don’t need to explain that we went golfing on Saturday October 22, 2016 at 1:00 p.m. at River Spirit Golf Club. To everyone one else you would think we were CRAZY.  You can see the snow on the Rocky Mountains to the west. And the wind was from the west as well, at least 20 klms per hour. But the golf course is closing for the winter and Sunday would be the last day they would be open. 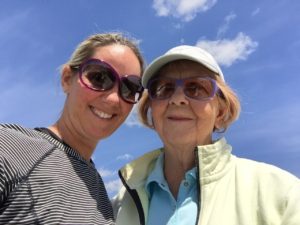 My daughter, Bridget (BK) had made the booking a few days earlier and really didn’t think it would be warm enough to golf with a forecast of a high of only 11 degrees Celsius. Then by 10:00 a.m. the sun was shining and there were no clouds in the sky. Also there was no wind in the valley where we live. She called me and said, “Let’s go Mom. I still have the tee time.”  So there we were bundled up and we were the only women on the course. I guess that shows there are some sane women who stayed at home.

With the westerly wind the first hole on the Spirit Nine plays much shorter than usual and I was on the green in two shots with a birdie opportunity from 11 feet. It was so windy on this elevated green that I hardly touched the ball with my putter and it was close to the hole and a tap in for a Par 4. BK had a much longer drive than I and said, “Maybe, just maybe, this will be the day I can beat you Mom.” Well then she flubbed her second shot and said something about her “tempo” being off and with a good chip she ended up with a 5. The second hole I totally screwed up two shots and ended up with a double bogey 6 while BK played it fine and scored a 5. On hole #3 My drive was beside the fairway bunker in the long grass and I was short of the green with my second shot. A chip and two putts gave me a 5. BK had a few shots after getting out of the bunker and ended up with a 7. I suggested she should keep those 7’s off her card if she planned to be the winner of this match!
Holes 4,5,6 we tied with both of us having a Par on the long Par 5 number 6. Then on 7 she went in the water and I had a Par. The Par 3 – 8th hole was directly into the wind and I was short of the green but chipped in for a Birdie. BK ended up with a Bogey. With my Par and her Bogey on #9 BK ended the nine with a 47 to my 40. She said all she needed to make up seven shots on the back nine. Not an easy task. 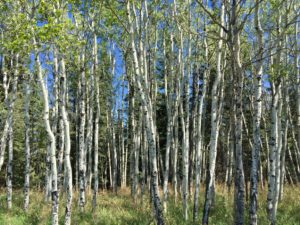 The Aspens along the Millburn eigth fairway

We both played great on the Millburn Nine with almost identical scores on each hole and each had 39! BK ended with 86 and me with 79.

No bragging rights for BK this time.

We played with a fellow and his Dad and had a really enjoyable day. The son had connections with Luther College in Regina and with BK having gone to Athol Murray College of Notre Dame at Wilcox they had lots to talk about while we waited for the greens to clear.

What a wonderful way for “golf crazies” to end the season in Calgary!