As I told you earlier, I was on the social committee of the Regina Esso Club when I worked for Imperial Oil. And we always had something in the works. 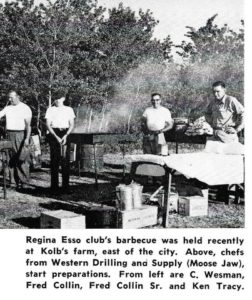 For our barbecues, we always hired a man who wasn’t a full time caterer but actually worked for Western Drilling Tools as our caterer. His name was Ken Tracy, and he was well-known by everyone in the oil industry back then as someone who always would to do a fantastic job.

He made the beans from scratch with bacon, sauces and rum that he baked some 48 hours. The steaks were the finest Saskatchewan beef. The baked potatoes were wrapped in foil with the melted butter would still be upright in the potato and, to this day, I still have no idea how he did this! Of course there were salads, buns and dessert. And this was done for around 300 people. 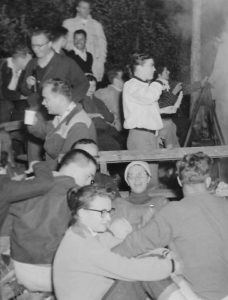 In the summer of 1961 my brother-in-law, Bill Rowbotham came to Regina to test some new machinery. He was the head of the Design Department of farm machinery company International Harvester Company out of Hamilton, Ontario. He had brought three junior Engineers with him to Saskatchewan, testing some new swathers on a farm near Regina.

Although Bill was originally from Saskatchewan, the three others were from Ontario. And they couldn’t have come at a better time as our annual Imperial Oil BBQ was the weekend they were in Regina, and I was encouraged to invite them, as guests, which I did.

They were so impressed — not only for the great food (and, of course, our great organization) — but especially when they saw the President of IOL, who made a trip out from our head office in Toronto, actually sat on the ground to eat with a couple of young draftsmen from the Regina office. Those kinds of things just weren’t commonly done, back then. 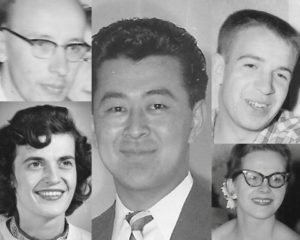 Monday night bowling turned out to be a major competition among the guys. Not so much with the gals although there were some pretty good bowlers.

The team I was on was called “The Essoles”, ha ha ha! and we had three really good bowlers on it, all of them were men: John Jensruska, Kaz Nakano and Steve Popoff.  And then there were the two gals….not so good at bowling….Eileen Jones and myself. Bowling was not something I was good at (and a lot of the balls I threw ended up in the gutter…)

Curling on Sunday night was a lot of fun too, although I was always cold in the curling rink.  We started curling at 6:00 p.m. which meant an early dinner for everyone but it was good to get people off the couch and getting some exercise. There was no serving of alcohol on Sunday in those days so we were usually home by 10:00 p.m. And with a good night’s sleep, we’d be ready for work on Monday. I could never get too excited about throwing those heavy rocks and certainly was never a good curler, either. 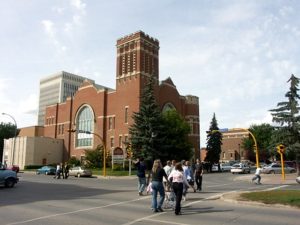 The only church I was a ever a member of was the Knox Metropolitan United Church at Victoria Avenue and Lorne Street in Regina, Saskatchewan.  Every year for the first week of December they put on a Christmas Concert. Although there were choirs with all ages participating from the many United Churches in the area there was not the Christmas Pageants that we put on in our one room school when I was young.  This was a place where many people went to sing along with all the Christmas carols that we all know.

I talked a dozen or more of my co-workers to attend one night and we had so much fun singing the carols.  But the highlight of this evening was there were five single young guys from London, England sitting in the row in front of us.  One of them and one of our gals got talking and would you believe started dating after that night? And they were married the next year.  How cool was that? 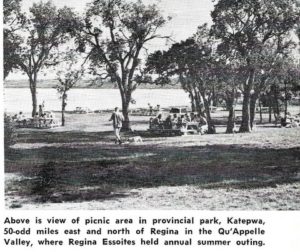 Katepwa Beach Golf Club the setting for one of our golf tournaments just a short distance from the beach.  We had some beach games, races, swimming and of course food and drinks.