I started my work as a teller at the Royal Bank of Canada in Craik, Saskatchewan. At that time Mr. Harry Hamre was the Manager.  I loved working in a bank as I had always been keen about numbers.  The Principal of our High School, Earle Kyle, told me after he had retired that I was the only student he had taught that received 100% in any Saskatchewan High School Provincial Departmental Exam. I received that 100% in Grade Eleven Algebra. 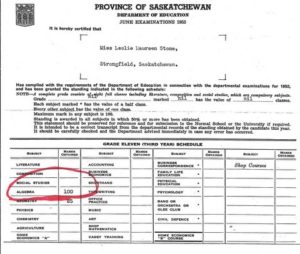 I remember how impressed how Mr. Hamre was with the reference letter Mr. Kyle had written about my mathematical skills. It was in the bank that I learned in a hurry as a teller that you have to “balance everything to the penny”. This served me well all my life. 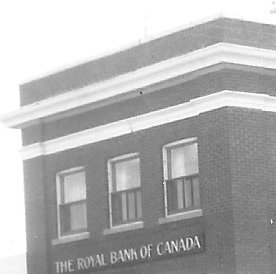 The Royal Bank in Craik

After one year in the bank I asked for a transfer to Saskatoon and instead was given a transfer to Yorkton, Saskatchewan.  I arrived in this small city at and I was so lonesome for friends and family I resigned the second day.

I did have good memories of Mike and Mary Actymichuck where I stayed for the month. 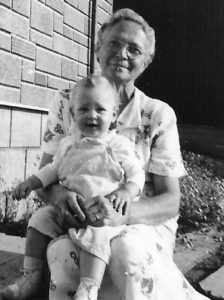 Mary Actymichuk with a granddaughter

They were retired and I came home over noon hour as the bank was only three blocks from their home and anyway Mary made Borscht for lunch every day.  I learned to make Borscht from Mary as my family had never made Borscht, being Swedish.  Mr. Hamre was so disappointed that I left the bank as he thought I would go far in banking.  Actually one of the guys I worked with in Craik became a Vice President with one of the major Canadian banks. 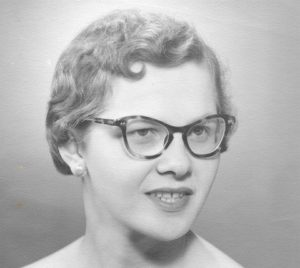 On to Regina I moved in 1954 and started working at the Saskatchewan Co-Op Creamery as an accounting clerk.  My boss was always leaning over my shoulder telling me how to do everything (I already knew) and I couldn’t wait to find another job.  The positive from working there was I became friends with a young high school girl who came in after school to process the mail.  This was Janice Gregg and she was the accomplished pianist at several O’Shea weddings.

Oh how lucky I was that a friend, Doris Bolduc, was working as a management secretary for Imperial Oil Limited.  This was 1956 and oil exploration was very active in the south east and north west areas of Saskatchewan.  Every oil company in Canada had offices and workers in southern Saskatchewan for the big oil play.  Doris suggested that I should apply for a job in the Accouning Department at IOL. 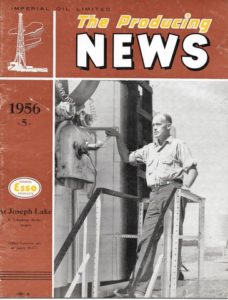 Now this was a great place to work.  We worked from 8:30 a.m. till 4:30 p.m. with an hour break at noon.  We had coffe breaks morning and afternoon.  There were about 30 of us in Accounting and staff was pretty equal guys and gals, although our supervisors were all male.  We worked hard but had fun when we worked.  Time and one half for over time and we worked a lot of overtime in November and December every year.  When we worked overtime we were even given supper money (it wasn’t much) but the guys were known to spend their hour (or more) at the Empire Hotel drinking beer.  Girls were not allowed in pubs at that time so we went to the Coffee Shop across the street to eat!   Thankfully there wasn’t much supervision those evenings we worked overtime as there was a lot of joking around during those hours.  We all had oak desks and those oak arm chairs with castors.  One of the guys late at night was telling a story and leaned back in his chair and tipped it over. He didn’t think it was nearly as funny as the rest of the 20 some working that night.  I am sure that hurt!

Our social committee, Regina Esso Club, was very busy organizing events.  We had bowling on Monday nights, curling on Sunday nights, golf tournaments, picnics at Katepwa Beach, BBQ’s and, of course, a Christmas dinner and dance in the Ballroom of the Hotel Saskatchewn.