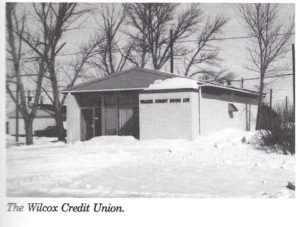 After Marcella Gordon’s husband Hughie died 1976, she rented out the farm just outside of Wilcox, Saskatchewan and moved into a mobile home, in town, just a bit down from the Wilcox Credit Union, on Railway Street.

The brick building that contained the Wilcox Credit Union was constructed just around the corner from Lane Hall, which housed the Arts Program at Notre Dame College at the time. If I’m not mistaken, it was on the very same land where Marcella and Hughie had originally had their house in town. In any event, shortly after Hughie died, she was hired to work for Blair Tubman, the Credit Union’s general manager, as their part-time bookkeeper. She was 71.

A few months later, in the fall of 1976, she had what she later described as being one of the greatest adventures of her life.  That’s when the Wilcox Credit Union was held up, at gunpoint!

I know this story well, having heard it from Marcella, as well as in the news after it happened. But because Marcella lived past 100, her life story was part of a centennial project as told to Saskatchewan writer, Ken Mitchell. The quotes from Marcella are taken from that story.

“It was in the morning that the robbers ran into the bank wearing balaclava masks and carrying sawed-off shotguns.  I thought it must be a joke until they said, “Lay down on the floor!””

“They then made Mr. Tubman open the vault and told him to lie down on the floor in there.  They tied his arms and legs.  They put me in a corner of the vault.  They tied my hands in front — I was still holding my pen in them.  Then they tied my arms and legs together.”

“The one fellow was kind of nice to me.  He had the most beautiful brown eyes, and didn’t look like he enjoyed what he was doing.”

Those dark brown eyes allowed Marcella to identify him when he stood up at the bank robbery trial months later.

“He taped my mouth with duct tape but not too tight so I could breathe. They took my glasses off and threw them in the garbage. They took all the paper money – over $5,000 – put it in bags and took off. There was actually more money in the till but they didn’t seem interested in that. They must have been beginners.  They had a driver waiting outside.”

“As soon as they left with the money, I got the duct tape off my mouth and then I used my teeth to bite the tape off my wrists.  I got my legs untied and freed Mr. Tubman, then I called the police.  The police got there right away, and a patrol car picked the robbers up at a road block half-way to Moose Jaw.”

“Mr. Tubman took it awfully hard.  He was a nervous wreck after that.  Not me. It brought a little excitement to my day.  I don’t let things like that get to me much. That’s one reason I lived so long.  I’ve never been depressed that I can recall, in my life.”