Ruth and I were invited by Don and Irene to go to the races on Tuesday, March 22.

“Ruth,” I asked, “are these thoroughbred horse races or dog races or what kind of races are they?” 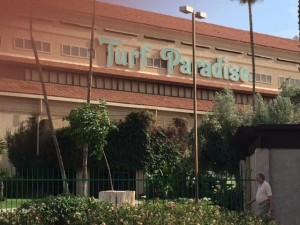 Ruth thought they were horse races and I checked the Internet to see where there was a track, etc. and found Turf Paradise.  Turns out, it was, indeed the right track.

We met three other couples at Don and Irene’s condo. Since we were meeting back at their place for eats after the races, we took the coleslaw that Ruth made and put it in their fridge for later.

Then we headed out in time to lunch at Turf Paradise before the races began at 1:25 that afternoon.  Lunch for me was a twist on a BLT with the addition of “A” – (Bacon, Lettuce, Tomato and Avocado – nice!)  It was tasty and came with sweet potato fries. After lunch, we were all ready to check out the horses.

When I was younger, my husband Doc and I would sometimes go to the races, but the last time we went, it was many, many moons ago. But I can remember the last time we did: it was in Regina, Saskatchewan. Doc was still alive and we went with our friends Don and Jackie Meyer. After the races, we went to a bar and I was ID’d!!!  I was 32 at the time and promptly gave the waiter a tip after I showed him my Driver’s License. What a lark!

I know a bit about racing – I understand the different formats, the way you can bet, the super exciting Quenellas and Exactas and the absolute thrill of cheering your horse and jockey on towards the finish line. Racing can be quite the addictive form of gambling, and even casual race track visitors can get caught up in the Racing Forms, past performances, jockey weights, etc., but I’m not one of those.

Picking By Name – and Number

I like to pick my horses by name — but not all the time. Sometimes I pick them by number too, and that’s what I did at Turf Paradise. Of course, the kind of money I was betting was chump change compared to what others were slapping down. I am also a little bit superstitious, always going to the same cashier to place my bets…and cash my tickets!

Then I just picked #6 UK Trampoliner and #3 Lucy Loves Nana to win, because I liked their names. And #3 won! Again a winner.

The next race I had no winner, but in the 4th and 6th, I picked two horses in the Exactas and both times they won.

I ended up about $17 up for the afternoon.

For supper, back at Don and Irene’s place, we had pulled pork, coleslaw, pickles and raspberry pie and crumble for dessert. It was a warm day, but rather windy, but it was a lot of fun, and rather funny that I ended the day being up, on a handful of two-dollar bets!