There is more than just golfing here in the desert. Staying with Ruth means we are up to something all the time (and sometimes it is “no good” wink wink) but Sun City is a busy place.  We hardly have time to check our e-mails – and seniors are great at keeping in touch! 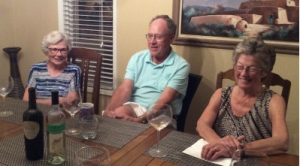 We had a dinner party on Saturday night with invited guests Adele Besler, Bill and Joan Bulmer, Lynn and Sharon Webster in attendance.  A bit of a pot luck setting with scalloped potatoes, fresh buns and apple pie arriving with the guests, and baked ham and Brussels sprouts being served by the hostess, Ruth. 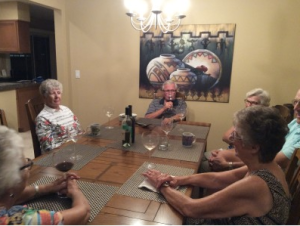 What a great evening we had with stories and lies and good fun.  About a hour was spent with the $.65 rummy game and I finished with bragging rights with a 1200 point total. 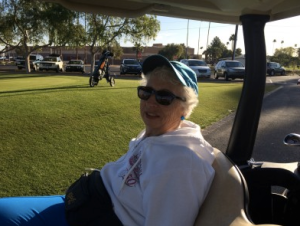 Ruth on the golf cart

Where Are Your Bodyguards?

Ruth and I went golfing at the Sun City North Golf Course on March 4th and we had a delightful time. The marshall came by to talk to us and asked us,  “Where are your body guards?” For a moment I was a bit concerned. He went on to tell us that we were the only women on the golf course and as we were two good looking women, maybe it wasn’t safe to be out here alone.  Funny…and I’d say that really made our day! 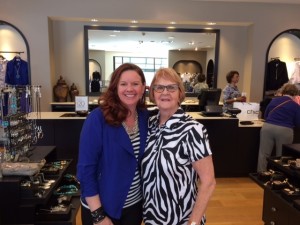 Monday was lawn bowling for Ruth and I spent some time with Chico’s Manager extraordinaire  Maureen Lesley at my favourite store, Chico’s. Now a Maureen Lesley with a Leslie Maureen – you don’t see that very often! I made another stop at Sees’s Candies for peanut brittle, not needed but oh so much wanted!

Then we were off to play bridge at the Community Centre and although there were only four of us we had a great time and the cards were good. Candy and Arlene are fast friends already.

Tuesday was the last of the Sun City Country Club Ladies Club Championship and Ruth was out of the house early for an 8 o’clock shot gun start for the final 18 holes.  Ruth said it was fun but she ended up out of the prizes. 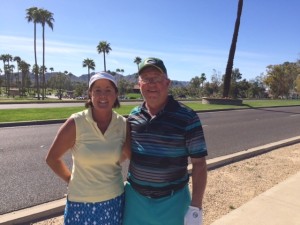 Wednesday we had a tee time at McCormick Ranch in Scottsdale for 11:00 am.  We left the house around 8:45 am as the City Street Maintenqnce crew were working on our street and were having the water turned off from 8:30 to 11:00 am.  We had plenty of time to shop and the ladies golf clothes brands were excellent in the Pro Shop.  Both Ruth and I were swiping our plastic for outfits. We actually were able to start early, at 10:30 am.  We ended up playing the Pines course instead of the Palms course and were lucky we did! We played with a couple from Wisconsin who live 20 miles from Green Bay and are Packer fans (as I am too!).  They were really nice to play with and were interesting and entertaining.

We were invited to Bill and Joan’s for dinner and in fact to play bridge for awhile starting at 4:00 pm. Since we were early off the tee we were able to arrive right at 4 o’clock! Ruth and I seemed to get all the high cards.  A lovely dinner was served on the back porch and we were serenaded by many, many birds singing in the trees until darkness set in. 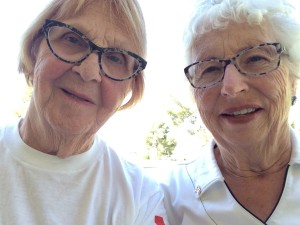 Ruth and Maureen playing for Canada

It’s rather fitting that Canadian Prime Minister Justin Trudeau was in Washington to meed President Barack Obama as today we had the annual Canadian-American Golf Tournament at Sun City’s Lakes West Golf Course! We picked up Lynn on our way to the course so Sharon would have wheels while he was out playing golf.

Ruth and I golfed in this tournament last year and although WE played well and were even in the score with the couple we played against, the overall tournament was won by the Americans with a score of 1776-1737. 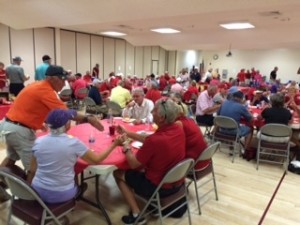 There was a bigger turnout this year than last with around 120 people participating.  Bill won the Men’s Closest To The Pin award and…Ruth and I won a Flight Prize award. Hooray! The Americans beat us by 39 shots – but there’s always next year.

Life in the desert is agreeing with us, wouldn’t you agree?