My bag is packed and so are my golf clubs, on my way to see Ruth in Fee-Nix. Or Phoenix for you purists! My trusted chauffeur, Bridget, is taking me through the fog to the airport.  In a little over an hour I am on the WestJet Connect flight.

Now I am in the air at 33,000 ft – and the plane is brand new. Funny how the seats are lined up in rows and the windows are opposite your knees. I guess there isn’t much to look at when you are above the clouds but somehow the design of the older planes had the windows so you could see out!

The cookies are made in Belgium and distributed through The Gourmet Centre on San Francisco. The Sesamee Snacks are made by Alments Krispy Kermels, Quebec City.

The Coke was real Coke and in a glass with ice.

A young girl with five month old twins was in the aisle seat. Very good babies, smiles and curious. I did not see the other twin, well I guess she did have him some of the time, until we were leaving, and her husband had the other twin.

The WestJet connect was fine if you want to watch a movie or $3.99 for 30 minutes wifi. The options are available.

Ruth met me when my plane landed and we waited at carousel One for awhile and then we were informed that WJ1402 baggage was in Three! My clubs were finally clanging out of the chute and we were off to the mall. The GPS couldn’t find the “mall” no matter how I tried!

We finally found the mall and we went in to Crate and Barrel and asked for directions. I knew Marmi’s shoe store was by Neiman Marcus and when we arrived inside the mall we were 30 yards from the store. One pair out of 20 fit.   Ruth tried out the cosmetics at a kiosk and then we came home.

Smoked oyster with cheese and crackers with next door neighbour Bonnie, and then the three of us were off to a concert. Burgers and fries at the food truck parked outside the convention centre was the next stop. Joan and Bill met us there and as we were finishing our food Lynn and Sharon arrived. We “seven” had seats together and the Roy Orbison Tribute was almost two hours. I really liked the band and I would give the lead singer about a “six out of ten,”. There was video presentation of the real Roy Orbison in between songs and this was well done and covered his whole life and the start of rock and roll. The best performance of the night was saved for the encore, “Pretty Woman” but a valiant effort was made of “Crying” earlier in the show. Home by 9:15 pm. 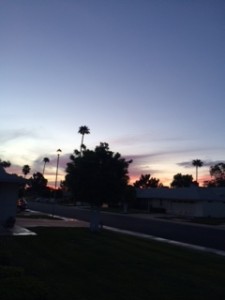 The club championship for the ladies on at the Sun City course today.  They played the first day on Tuesday, the second today (Thursday) with the third day next Tuesday.  Ruth is playing in this tournament and I am holding down the fort expecting a high of 99F today.  Put on your sun screen everybody.

Just a little time for shopping! 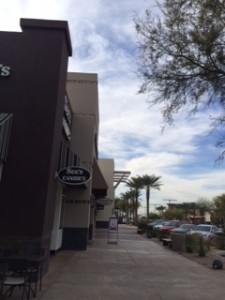