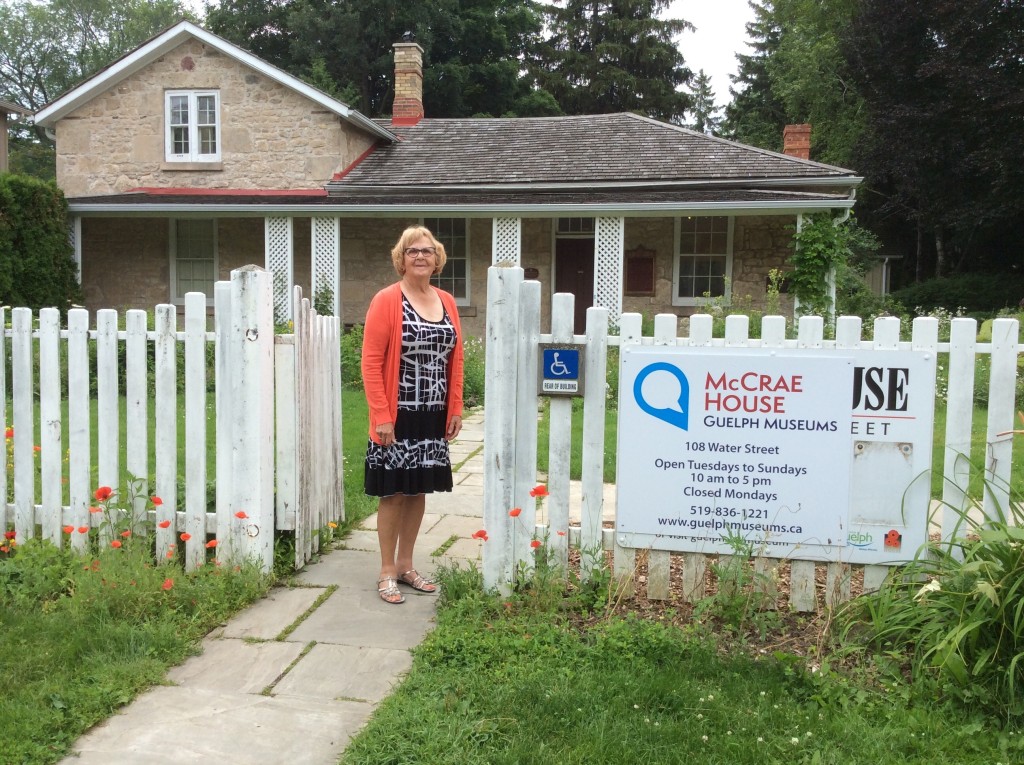 Maureen in front of McCrae House in Guelph, Ontario

There are many songs I know by heart. Take “The Wreck of The Number Nine“, for example. That’s a song that was written way back in 1927 and I’ve been performing it for family and friends ever since I was five years old – always standing up! It’s a song about a train engineer who leaves his sweetheart behind to drive “Old Number Nine”. At the end of the song, the engineer dies in a head-on crash, and his dying words for his love always make me cry and I never reach the end of the song without tears falling down my cheeks!

When it comes to poems, though, I’ve got a pocketful of favourites, but “In Flanders Fields” probably comes to mind first.

It’s a poem that many Canadian students learn in grade school, sometimes close to Remembrance Day (November 11th) or when studying about the First World War. I’m pretty sure all my kids know the poem, too, because our family has a connection with the poet, John McCrae, from Guelph, Ontario. 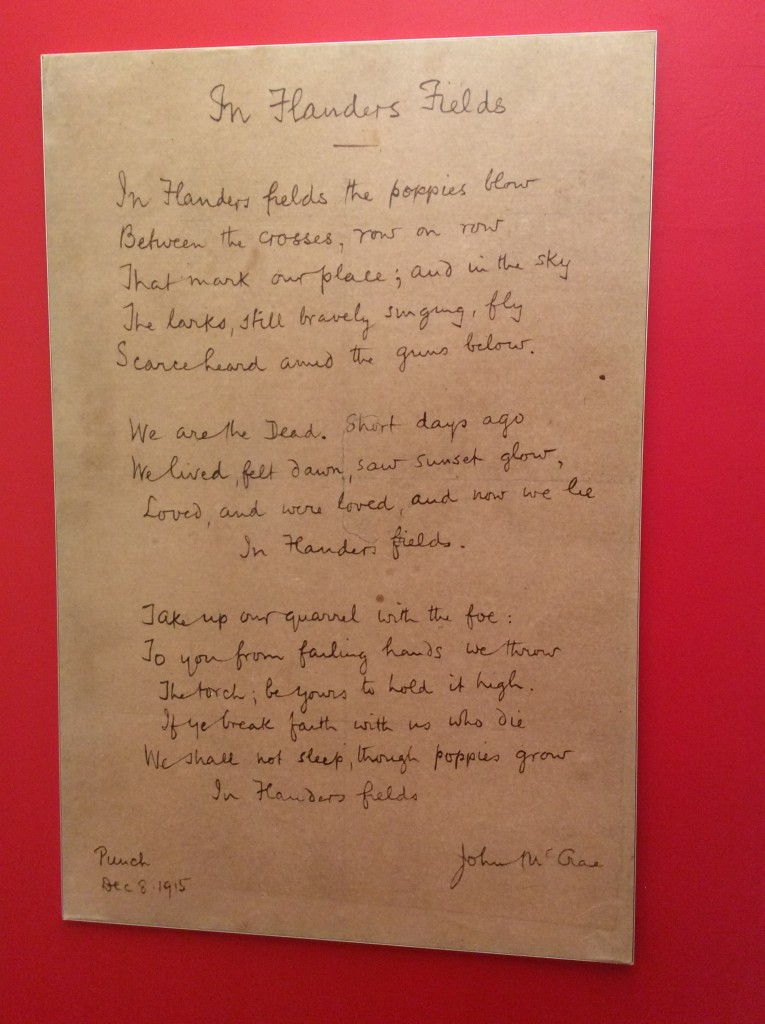 In Flanders Fields – at McCrae House in Guelph

My father-in-law, Dr. Joseph O’Shea, served with Dr. McCrae in the Royal Canadian Medical Corps, and both of them were gassed by the Germans with deadly chlorine gas in the Belgian city of Ypres. I remember my husband retelling stories that his father had told him about how bad that war was, of how the physicians were faced with unbelievable wounds and unimaginable human suffering, sometimes wading in inches of blood on the floors of their makeshift operating theatres.

Writing poetry was something that many soldiers did when ever they had a bit of time on their hands. Perhaps they were putting the stanzas together while wet and scared in those muddy trenches, or while waiting for a battle to begin again. We inherited poems that Dr. O’Shea had penned and never had published, most of what he had written was also about the war, missing home, or simple, beautiful things, like the poppies on the fields in Flanders. Another Canadian poet, Robert W. Service, wrote “Rhymes of a Red Cross Man” based on his experiences as a stretcher bearer for the American Red Cross, and that book was a part of the collection of war-related books the doctor and his wife, Bridgetta Connaughty, collected. 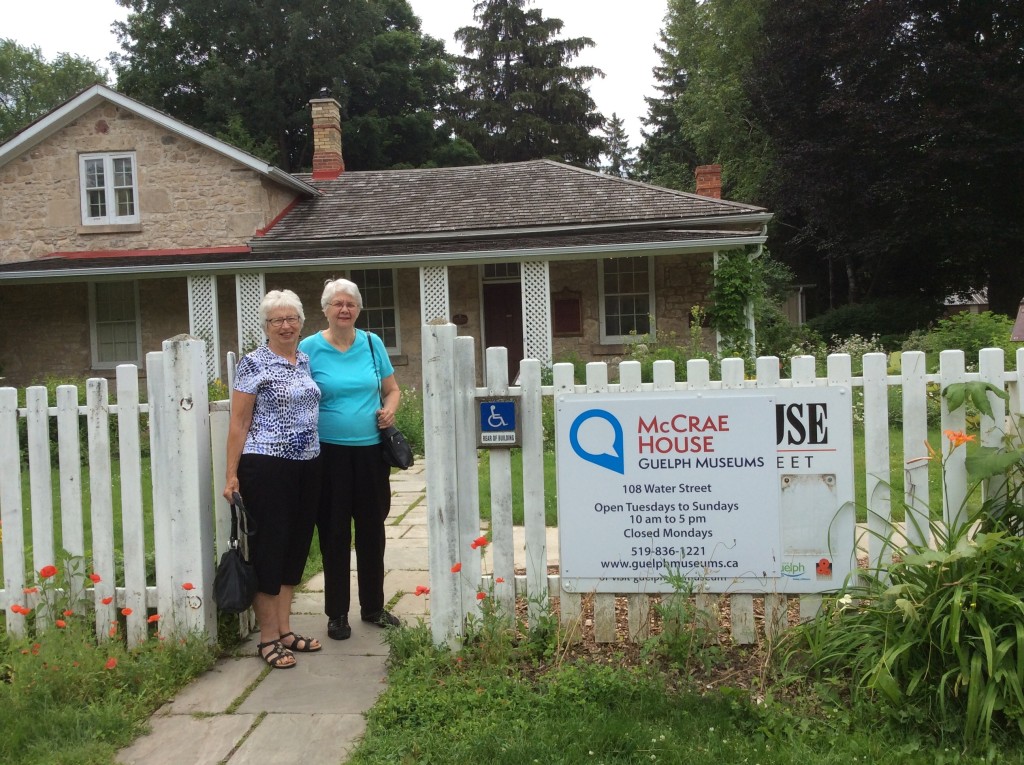 While Ruth and I were on our road trip this past summer, we made a stop at the McCrae House in Guelph, Ontario, which is now an historical attraction in the city. We learned a lot about McCrae’s life and toured his family’s cottage, a preservation of a home from the 1870”s. In Flanders Fields was first published in 1915 in Punch, a British magazine, and it became immediately popular, quoted and re-quoted for inspirational speeches and fund-raisers. The poem also inspired the use of the poppy as a remembrance symbol, something that has been used since 1921 when the American Legion used them to commemorate the American soldiers killed in the Great War.

Today, small plastic poppies are used to raise funds for veterans, especially in Great Britain and Canada, and wreaths made of poppies are often laid at the cenotaphs recognizing fallen soldiers.

McCrae was 45 when he died in 1918 of pneumonia. His poem has lasted a century now, and is one that I know by heart.

Do you know In Flanders Fields? What is your favourite poem? Let me know.