Maureen O’Shea turns 81 today and I’d like you to help me wish her best regards for the year ahead. 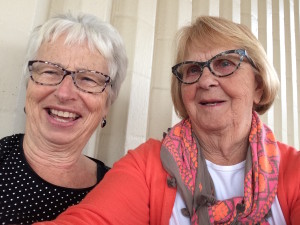 Ruth and Mo at the Toronto airport

Maureen (my mom) got on the plane from Calgary to Toronto at 5:30 a.m. on Monday morning — the start of the trip to Ontario. A few hours later, she’d landed at the Lester B. Pearson Airport, and Ruth was there, in her Oldsmobile Ninety-Eight. That’s the car they’ll be using for the upcoming road trip. Off they went to Ruth’s cottage, just over two hours away.

The cottage is for sale, and Ruth and Mo will be busy getting it into sales shape, making it into, as my friend Nancy used to say, “the prettiest cottage in the area!” The staging will begin in earnest today, uncluttering furniture, moving some onto the porch and perhaps garage selling the excess, but that’s still not decided. The cottage is being sold turn-key, I believe, so everything included, still, the staging needs to be right to get the buyers interested!

I got a Magic Jack call from Maureen yesterday afternoon. I know many people who use Magic Jacks to make VoIP (Voice Over Internet) calls — but you do need to have an Internet connection to make them, so she called me from the local libray. Later, we switched to Facetime — she has an iPad and I have a MacBook Air, and Facetime is an easy way for people using Apple products to communicate with each other. She sent me some pictures she’s taken to upload them to the blog. 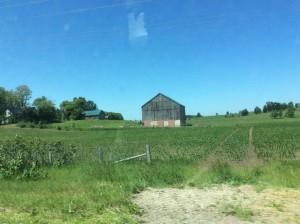 Maureen said she and Ruth had had a wonderful lunch at the home of friends of Ruth’s and her dearly departed husband — but I’ll let her tell the story. However, the scenery is beautiful, as Ontario is, and I’ll share one of Maureen’s pictures with you so you can see it too.

It was a quick chat for a couple of reasons. I’d published a story on Monday on The Hockey Writers about the Four Hounds in the Stanley Cup Finals – these are four boys who all went to school and played hockey at Notre Dame College in Wilcox, Saskatchewan, a school where my dad, Doc, my sister Bridget and I all attended — and my mom had volunteered for several years on their Alumni Board, so we have a lot of interest in the school. Since the Chicago Blackhawks won, and Hound Brad Richards had played such a great role in that last game, I’d spent part of the morning on the phone with 74-year-old Terry O’Malley — 3 time Canadian ice-hockey Olympian (one time bronze medal winner) and former Notre Dame Hounds‘ coach, about his memories of Richards as a Bantam AAA and Junior A player. And then, because he had a fishing story for me — about lobster fishing with Richards’ parents, Glen and Delight, and he mentioned a dear friend of my mom and dad’s, John Weisshaar, I had to give the Weisshaars a call. They live in Ontario now, and Johnny, a farmer, school bus driver, coach and team manager from Wilcox, can tell the stories and has a great memory for a guy in his 8th decade. I spoke to his wife Roseline for quite a while too..I’d visited them two summers ago, and I miss them, especially since they’re some of the handful of people left who were good friends with my dad. Roseline, who has had Multiple Sclerosis since 1958, has never let her disease stand in her way of being Roseline. That’s probably why they were chosen the Godparents for my younger sister, Lisa: great character and a great character!

I find it hard to believe that people like John and Roseline are getting older. In my mind’s eye, they’re still super active and in their 50’s. But not any more, now that’s me. Roseline tells me, “Colleen, it’s hard to get old.”

My mom was only at the library for half an hour and soon, Ruth was back from running errands and off they went again. Maureen has some stories in the pipeline which I know you’re going to love to read and hopefully we’ll get them published this week!

Today is my cousin, Deborah Rowbotham’s, birthday. Deborah will certainly enter into this blog from time to time, she’s one of my mom’s favourite road trip and golf partners. Happy Birthday, Debba Dear. Have a great day on the golf course (I know that’s what she’s got planned!) The picture of Deborah on the left (doesn’t she look great?) was taken after she and Maureen participated in the Huntsman World Senior Games in the golf category last year — but, as usual, that’s a story better left for Maureen to tell than me. It’s Deborah’s “Bus Pass” day, as my dad used to say, the day that seniors everywhere used to wait for to get reduced travel rates on public transportation. If, as my mom says, 78 is the new 65, then Deborah, you’re probably turning 50 today! Hooray!!!

And One More Thing…

You can follow my mom on Twitter — she’s @sevenpars (the day she shot 7 pars was a proud moment). She’s getting more and more followers, but her biggest follow so far this week is UK publication, Lady Golfer Magazine! Check them out. She only has 20 Twitter followers so far, so I’m impressed. Well done, Maureen, and Lady Golfer Magazine, my mom is certainly your target audience! Kudos to you too!