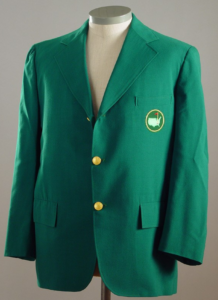 Not just any green jacket – the Masters jacket

Many of you might say, “Why in the world would I be interested in looking for a green jacket?” And I would reply, “Every Professional Golfer would like to have the green jacket.” Mind you only the year that you win it can you actually “have it” to take off the property of the Augusta National Golf Club. However, once the quest is over and you have won the Masters tournament, it will always be available at the club for you to wear when you come back each year. And once you have won it you are entitled to play in the tournament every year. Forever.

The Masters is undoubtably ranked at the top draw of the four Major tournaments.  It is probably the most famous of the four, certainly the most opulent, beautiful golf property you can find anywhere.  The abundance of so many varieties of trees and flowering shrubs along with perennials in full bloom make it truly a sight unparalleled anywhere. It has a history of 81 years of competition that draws patrons by the 100 thousands flocking to this venue every year.

The Masters Champion receives a green jacket from last years champion. This year was no exception as Danny Willet slid the jacket onto Sergio Garcia.  It was the fist win of a major championship for Sergio after oh so many tries. He had played in 74 major championships and came close to winning s few times. But something always happened to keep a “major win” off his resume.

Most of you know his history starting back in 1999 when he won the Amateur award in the Masters and burst on to the golf scene.  Sergio was a fiery Spaniard and emulated the great charismatic Seve Balleseros. Seve was the most feisty, talented golfer of his time. Sergio had a love/hate relationship with the American fans. He was taunted and ridiculed and of course retaliated. Sergio said some things that I am sure many golfers thought but never said because they didn’t want to rock the boat!  One time it was raining so hard the greens were flooding and the tournament wasn’t stopped. Sergio said if one of the major contenders was playing they’d would have stopped the tournament. Of course this didn’t sit well with the American fans who need to have a “idol” no matter how he behaves on or off the course. I watched firsthand once at a green where the number one player on the tour stalked around and around the putting surface for over 5 minutes before hitting his putt.and he wasn’t penalized for slow play. 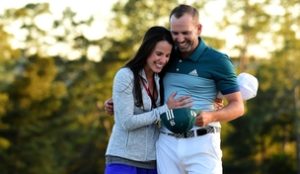 Sergio and Angela after winning the Masters

This year will be extra special for Sergio. He is getting married this summer to his girls friend,  ANgela Atkins. We all are so happy for Sergio as the outside world would all agree,that,he has found the love of his life.

It really wasn’t until the 2017 Masters tournament that the American fans were actually cheering for Sergio. Perhaps it was because Justin Rose had won the Gold Medal in the recent Olympics and they chose to cheer for Sergio. We will never know what perpetrated the following this time but even Sergio felt the love of the crowd. He actually said it felt like he was golfing in his home country, Spain.

Having the crowd behind you really does give you incentive to play your best. 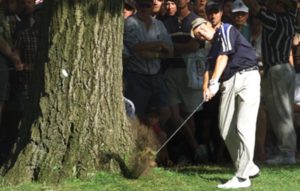 Although many people I knew felt the same as the American fans I always cheered for Sergio from the first time he appeared on the golf scene.  I never lost faith in him and through all the years I still cheered him on in every tournament he played that was on TV.

I have always wondered why the TV coverage by the American networks monopolizes the American players. It is so disappointingly to never get to see more of the players from around the world in these big competitions such as the majors. It is such a pleasure to watch the International TV coverages from the European tour as they cover the play of more players.The OPEN Championship TV coverage is exemplary in making sure every single player in the tournament is seen on TV. 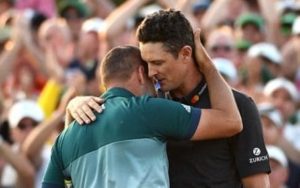 It was thrilling to watch the battle between  Justin Rose and Sergio Garcia.. As the saying goes, “anything can happen on the back nine on Sunday at the Masters”.  We fans supporting Sergio were in for some nail biting moments until he sank that putt for a birdie and the win over Justin.

Finally the quest for the green jacket was over for Sergio and a Major Championship win was on his resume. Well played.