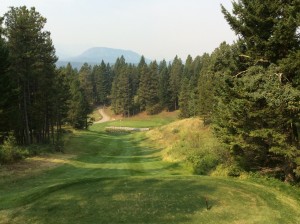 The Signature Hole (#3) at the Crowsnest Pass Golf Club

Friday morning, we were on the road at 7:30 a.m. with coffee to go!  The sun was an eerie bright red, barely to be seen through the forest fire smoke that was blanketing Cranbrook, B.C. The Crowsnest Highway – Highway #3 – has been widened and improved over the years and is a comfortable drive even though it winds back and forth along the Elk River. This is no Indianapolis Speedway but I checked on Google and the estimated time from Cranbrook to Blairmore, Alberta was two hours.  Sure enough, we were ordering breakfast at the club two hours later. We had decided to play a round of golf at the Crowsnest Pass Golf & Country Club and had an 11:00 tee time. 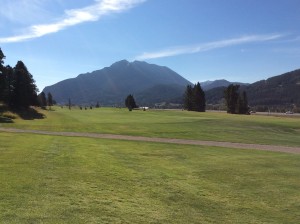 Since we were ready well ahead of our scheduled tee time, I asked the pro shop if they could move our times up. It turns out that there was a gap from 10:30 until just after our original tee time, so we started after the 10:30 foursome.

In fact, we were behind a couple of foursomes but it didn’t effect our playing time.  Although Golf West awarded this course the “Most Scenic Alberta Course” in 2014 we could not appreciate some of the sights because of the smoke from the forest fires.  We did enjoy the course even though the wind picked up and it became rather windy for our last four holes.

I didn’t check my Sky Caddie before leaving Cranbrook – and WiFi – to see if I’d already had the Crowsnest Pass course loaded onto my Sky Caddie SG4, and wouldn’t you know it, I didn’t have it.  I wouldn’t call that an “epic fail”, but both Ruth and I really missed having a rangefinder to show us where we were on the course.  There are ten doglegs on the course, and the signature hole is #4 a downhill par 3 with a pond in front of the green. if you go long, there is the forest, and not long enough means water.  I hit a high, clean 7 iron and my ball landed and stayed on the green. Woohoo.

That was my shot of the day!

When we finished our round, we headed across the highway to fill up on gas and the station had a Tim Hortons attached to it!  We bought a crispy chicken sandwich, a wrap and two coffees and we started on our trip back home.  We were surprised at the traffic coming down from Calgary area on Highway 22: it was wall-to-wall!  Maybe it is like that any Friday afternoon in the summer.  We didn’t pass any Jimmy’s or Whites, and there was certainly no need for little white pills to keep us awake as Dave Dudley sang about in his 1963 hit country song “Six Days on the Road” – do you remember that song? Our six days on the road would soon be over, and we would easily make it home tonight.

We were home safely, around 6:00 p.m., just in time to watch the end of the Blue Jays game!