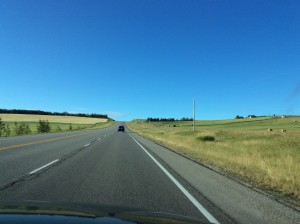 It was a beautiful morning in Calgary for the start of our trip. We set off just after 7:30 a.m. on Sunday, heading west on Highway #8.

The last time that Ruth was in Fernie, B.C. was about 40 years ago and I thought it would be nice for us to take that route to get us from Calgary to Whitefish. I have been down that way many times and have used pretty much all the different routes available to get there, and I like this one the best. 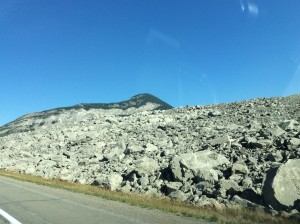 And this route didn’t disappoint! The views of the mountains were spectacular and we saw wildlife too: a moose, a fawn searching for her mom — and at least one hawk.

En route, we stopped in Blairmore, Alberta for a coffee at the Crowsnest Pass Golf & Country Club.  The great weather was reflected by the number of cars in the parking lot; there was a group of six having breakfast in the restaurant. After a quick stop there, we were back in the car, and back on the road again.

On The Road Again

As we neared the border crossing at Roosville, Montana, we could see smoke in the sky as there are, as you probably know, dozens of forest fires burning in the mountains. After the border, we drove past the turnoff to The Wilderness Club (where we’ll be staying and playing golf at on Tuesday) and we started searching for the On the Fly Cafe which I’d found a great write-up about on the Internet and thought we should make a scheduled stop. 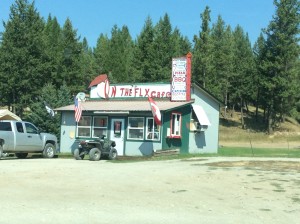 Trina Kelly’s On the Fly Cafe

The thing is, our GPS couldn’t find it. I searched for it, but couldn’t find it. So we made a rest stop just off the highway to have a bite to eat – a small picnic that consisted of a sandwich and some water that we had packed. As soon as we started driving again, wouldn’t you know it, perhaps just 100 yards further down the road was the cafe! So we stopped the car, and in we went!

We talked to the owner, Trina Kelly, and had an ice cream cone each. We’re going to make a stop here on our way back to Canada on Wednesday. 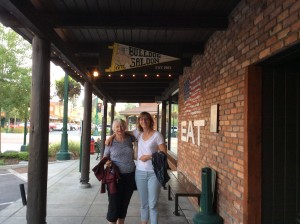 Ruth with her daughter Anna at the Bulldog Saloon

Ruth’s daughter, Anna, and Anna’s family are have also been down at Whitefish and we met up with them. Ruth, Anna and her family went for a boat ride and while they were doing that, I went and checked into Grouse Mountain Lodge and discovered they have no Wi-Fi – it has been down for TWO days. But I was able to prove to them the rate we’d been promised — which was different from what they were trying to charge us. As you may recall, we’re in Whitefish because of a flyer we found in the paper last week with a stay and play offer at par for the Canadian dollar. The deal gave us a room at the Grouse Mountain Lodge and a round of golf at our choice of 5 different golf courses for the rate of $175 Canadian per person. I’ll update you on this as soon as it’s resolved.

I’ve found a WiFi connection and I am sitting on the deck at the Harbour Mountain Condos writing this at 5:15 p.m. Sunday afternoon.

I went back to Harbor Mountain, the resort where Anna and family were staying and sat down by the lake for an hour.  Then Anna, Ruth and I headed downtown to Central Avenue to the Bulldog Saloon for a burger and a Rum and Coke.  We had to pay for the burgers in American dollars, but the drinks were all in Canadian!!!  The burgers cost $8 each and we got three drinks for $9.  Crazy.  The bar was full of patrons but we didn’t make any new friends. There’s always tomorrow!

We have a few new golf courses to meet this week, I’m looking forward to it, it should be fun.