There are more friends I’d like to tell you about.

I met Dianne Thompson and her husband Garry in 1979. One of the partners from DH&S called me to see if I would do the monthly accounting for their company Norcal Reproductions. For almost twenty years I would go to their business every month and enter their accounting  into my home computer. I would go there after I finished work and Dianne would stay with me after the store closed. We would visit while I reconciled the bank account and collected all the information I needed to produce financial statements for the previous month and year to date.. This way if I had any problems she was there to help me. Almost every month we would go out for dinner when I finished getting everything together. Most times we went to Nicky’s restaurant on Broad Street and we became good friends. I really enjoyed Dianne’s company.

June and Wally Hudyma lived just around the corner from me on Darke Crescent. I met June at the Murray golf course when I started golfing there in 1984. It was likely in about 1986 that we started taking turns driving back and forth to the club. We became best ball partners at Tor Hill and continued as a team till I moved to Calgary in 1998. June and Wally are very active in the community. They were willing participants to canvass for the Cancer Blitz that I managed for the Hillsdale area every year. They used to be in a singing group that entertained seniors on a regular basis from early fall till late spring every year. I’ve had many Sunday dinners at their home. June and I would golf on Saturday and Sunday in the summer months the years we were both working. After golfing June would ask me to come to their house for dinner. Wally would have everything prepared for a great BBQ when we arrived at the house.

As noted in the golf section of my story, June and I made many trips together. We often went to Saskatoon to golf at the Willows and would stay overnight with Gerald and Dorothy and then golf at Elbow on our way back to Regina. We decided to go to Minot for a couple of days to shop in late October one year. We had beautiful weather on the way down and the next day in the afternoon it started to snow. Well it snowed a lot. 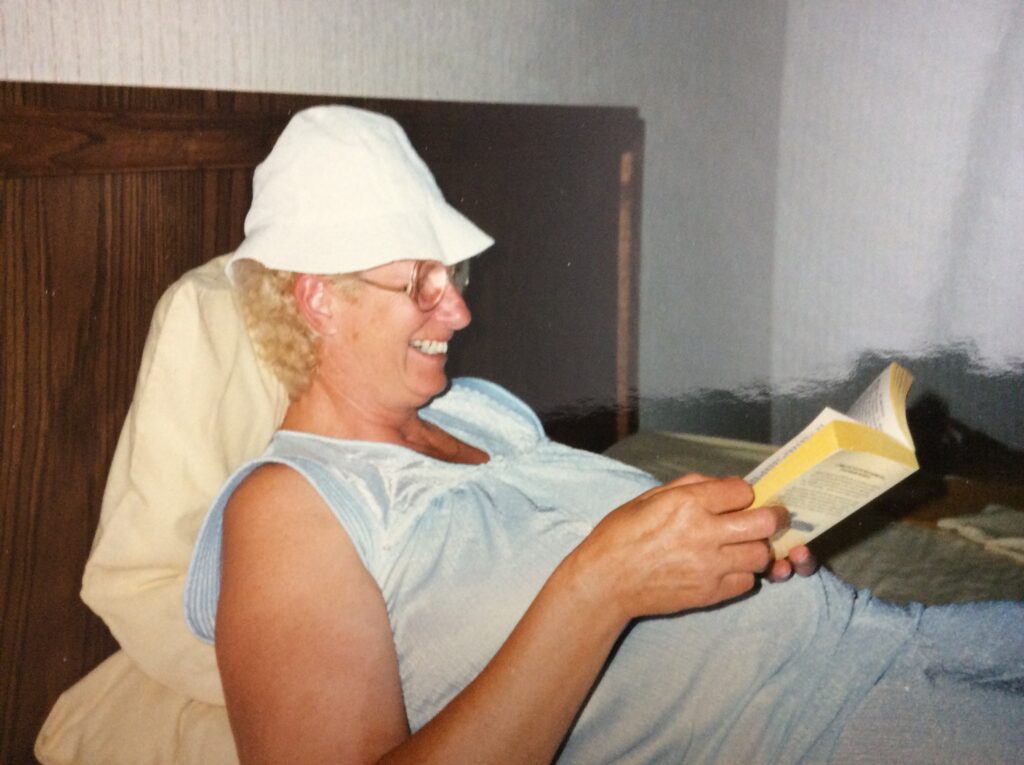 June had it all figured out:  take out a  good book, put on your golf hat and read.

Not  only did it snow but the wind blew the snow into major drifts. You could hardly see the tops of the cars in the parking lot. We were storm stayed for another day and the mall wasn’t open because the streets were all closed and the staff couldn’t get to work.  Finally we loaded up the station wagon wagon with cases of Coke and left Minot. The highway was really icy for about six miles and then there was not a flake of snow on the ground all the way to Regina. There was all the news about the snow conditions around Minot but no news about the conditions to the Canadian border. After Doc passed away June and Wally included me in many holiday celebrations, especially New Year’s Eve dances and parties.

I talked a bit about my relationship with Barbara and Jerry Zylak in the golf section of my story. Barbara and I have spent a lot of time together other than golf. We both love to shop. I probably talked her into going shopping and we could hardly wait for spring so we could check out the stock at the Pro Shops. Not only did we go to the Murray and Tor Hill clubs but we also could be found at the Wascana Country Club and the Royal Regina Club. I also had a tendency to visit Barb when Jerry was away and we would eat Spinach and Feta Pizza from the Copper Kettle and burn the midnight oil reading the latest golf magazines. Since I moved to Calgary, Barbara and Jerry had been coming to Calgary three to four times a year. Barbara and I usually spend a whole day or two together “shopping” when they are in town. Sometimes Barbara, Jerry, and I would go out for dinner together or they would come to my house to eat. It seems that there are always new stores opening here in Calgary and Barbara and I are keen to check out the new stock. We often say that this time we will peruse the antique shops in Inglewood but so far we have not made it past the malls. Jerry is no longer with us but Barbara and I visit regularly on the phone and it isn’t unusual for us to talk for an hour. 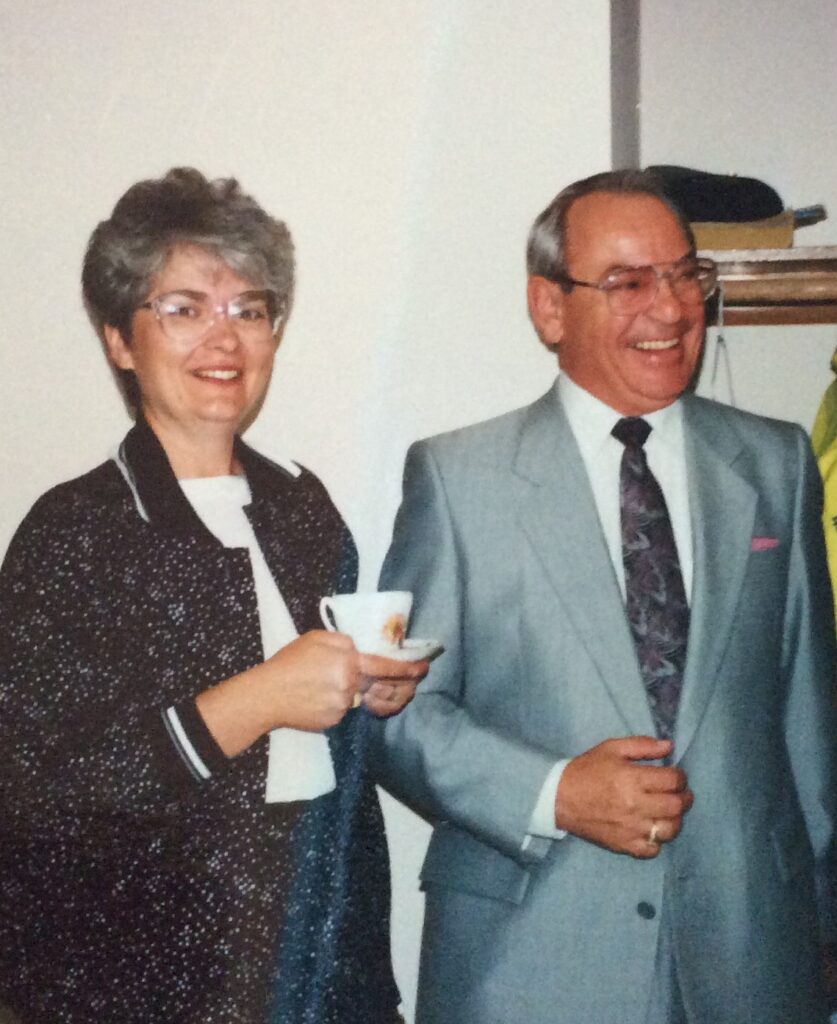 I believe we met Joan and George McCallum sometime after 1977. That was the year that Joan began working at SGI with Doc in the mailroom. Joan and George would sometimes stop at our home after work on a Friday for “Happy Hour.” This often led to a dinner of Chinese food brought in or we would go out for dinner. George and Joan were major Roughrider supporters and every year they hosted the Grey Cup Party at their home. There was a large crowd of business friends, Joan’s sisters and husbands, their family Doctor and his wife, friends from SGI and other neighbours and friends. There would be three TV’s in the family room and of course we had a “Grey Cup Pool” to which we put our bets. We all brought food and drink and it was always a lot of fun.

George was Chairman of the Canadian Cancer Society (Sask Branch) and it was he who talked me into taking over the organizing the “Cancer Blitz” for all of the Hillsdale sub-division. I was fortunate to have most of the same 28 volunteers for the eight years I participated in this fund raiser. We collected more money than any other area of the city and I think it was because we had mostly the same volunteers every year. I made sure every year that I put on a big spread of good food and drink for “my” volunteers. I think that helped to have them coming back every year. Not only it was easier for the volunteers to do the same streets but I also think people are more comfortable donating to a familiar face!

Doc was good friends with the owners of Speers Funeral Home. He could always borrow one of the Cadillac limousines for a special occasion. One such occasion was when Nita and Bill Gourdier from Kingston were celebrating their 25th Wedding Anniversary. George and Joan arranged for them to come to Regina for a couple of days and then go to Las Vegas for five days. They had a large family and one child with Down’s Syndrome. Nita had never been on an airplane or been away from her kids until this trip. 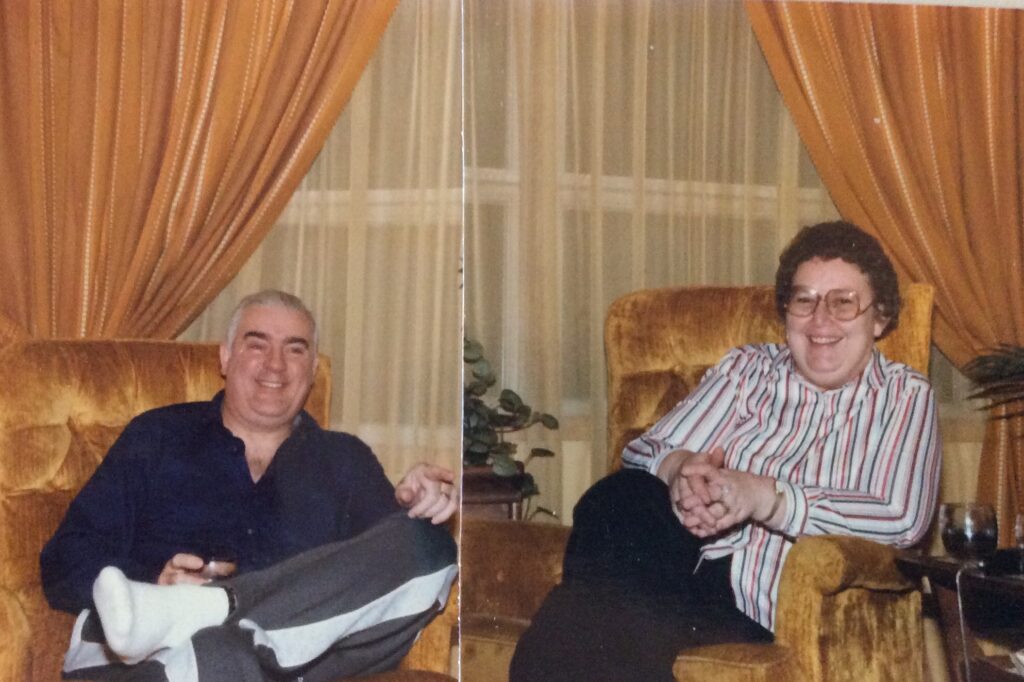 Doc put on his chauffeur’s hat and I dressed up with lots of camera equipment to act the part of a photographer from the local newspaper. We pretended not to know George and Joan and put out the “red carpet welcome” at the airport for this couple. I took lots of pictures. We settled the foursome into the limousine and gave them a tour of the city of Regina and then delivered them to the McCallum home. It was not long after that when Nita and the above noted child were killed crossing the street right where they lived. Bill passed away a month later likely from a broken heart.

One of the fun weekends we had was a motor home trip to Plentywood, Montana. George, Joan, Garry, Lois, Doc and I took off Saturday morning and headed down Highway 6 to Plentywood. We stopped at the grocery store for goodies to snack on and some beer. A trip to buy some Scotch and Rum was done and we settled in for a good visit. We went to the one night spot in Plentywood called the Blue Moon for steaks for dinner. After dinner se sat around the living room of the motor home telling stories and generally having a good time. With six of us in the motor home there was not a lot of sleep that night. Every time some one moved it seemed we all woke up!! We had a lot of laughs. Sunday morning we all went to church – NO!. We went for brunch and then got on the road again for homes in Regina.

I started playing whist with Mama, Daddy and my brother Jim when I was quite young. We even tried a bit of bridge but it wasn’t till I came to Regina that I played bridge regularly.

After I was married I spent quite a bit of time with Sully and Norma Ehman as Sully had been Doc’s lawyer over the years. Sully and Norma were also Colleen’s Godparents. Norma like to play bridge and we started a bridge club with Mary O’Leary, Jan Campbell, Leanne Siller, Rose Bertram, Rita Poissant, Jackie Meyer. 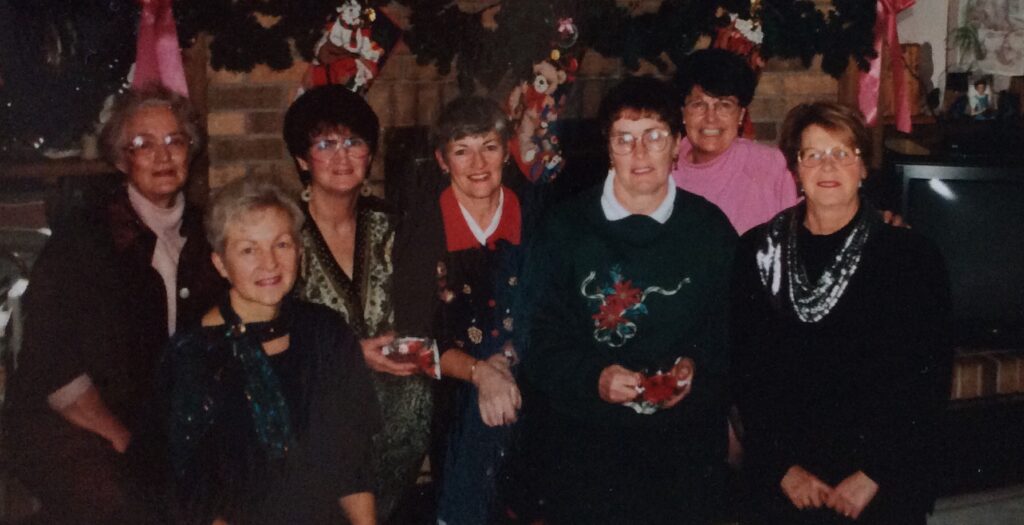 Lynn Gottselig applied for a job at Farm Light and Power (FLP). I believe there was another gal from Balgonie working in FLP Typesystems and this is how she heard about the job. I knew when she walked into my office that she would likely get the job because she was wearing a red suit. That shows confidence! She quickly learned her job and also learned that you get out what you put in to a position. She found Harold McCallum to be a great teacher in the art of “sales” and it wasn’t long before Lynn was trying her own style of selling advertising. 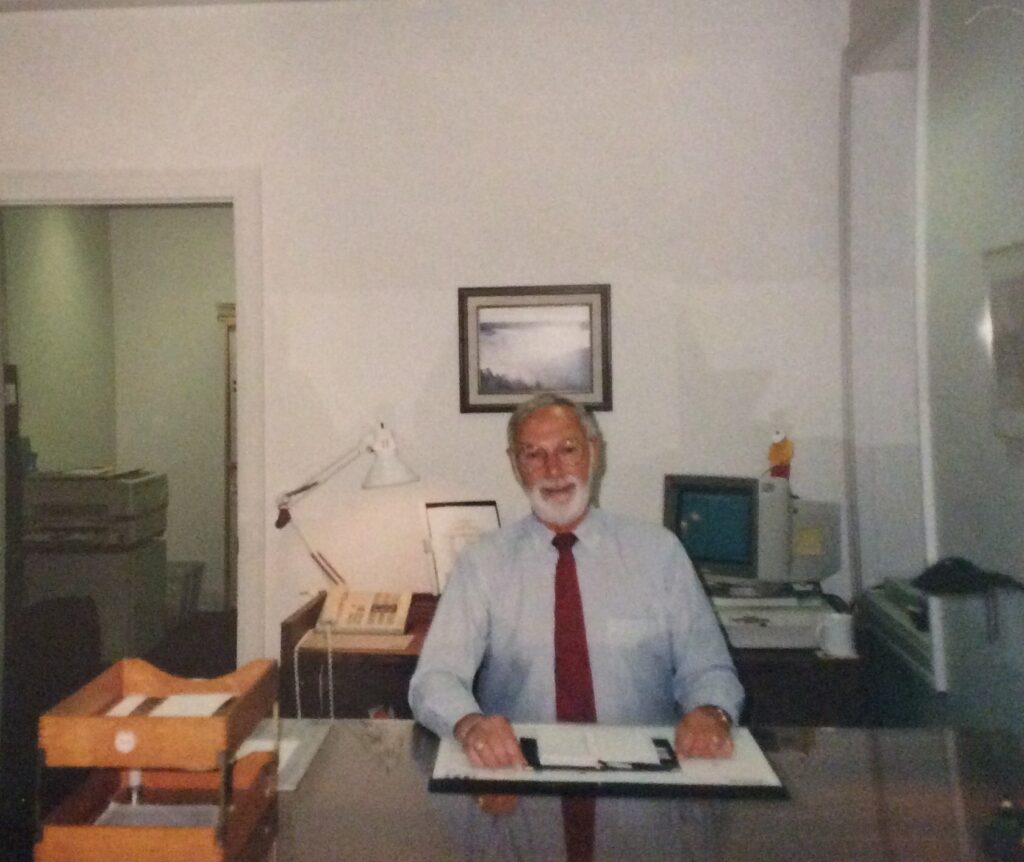 We were a close knit group: Harold, Lynn and I. We could work really hard to meet deadlines. We also made a point of having breakfast together about once a month at the Hotel Saskatchewan. Harold and I were often at work making coffee early in the morning and then we could leave mid afternoon. Lynn has been a media buyer in Regina since FLP closed. She is a good friend of mine. 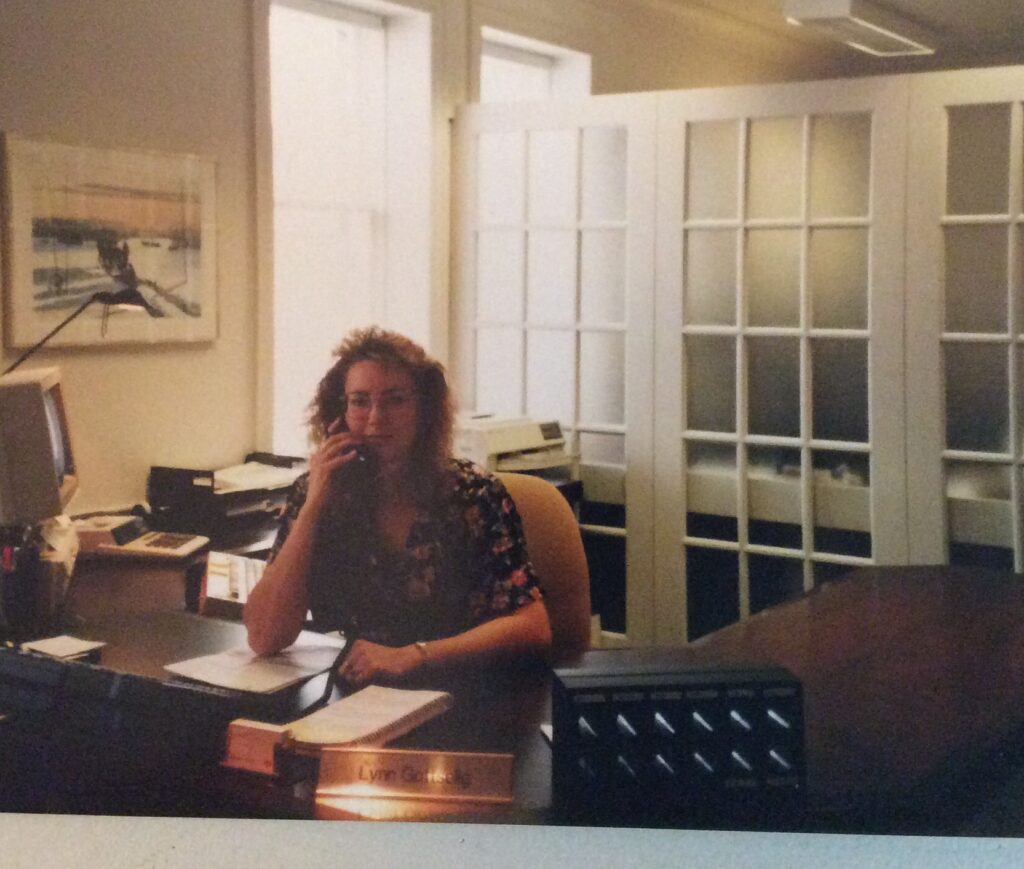