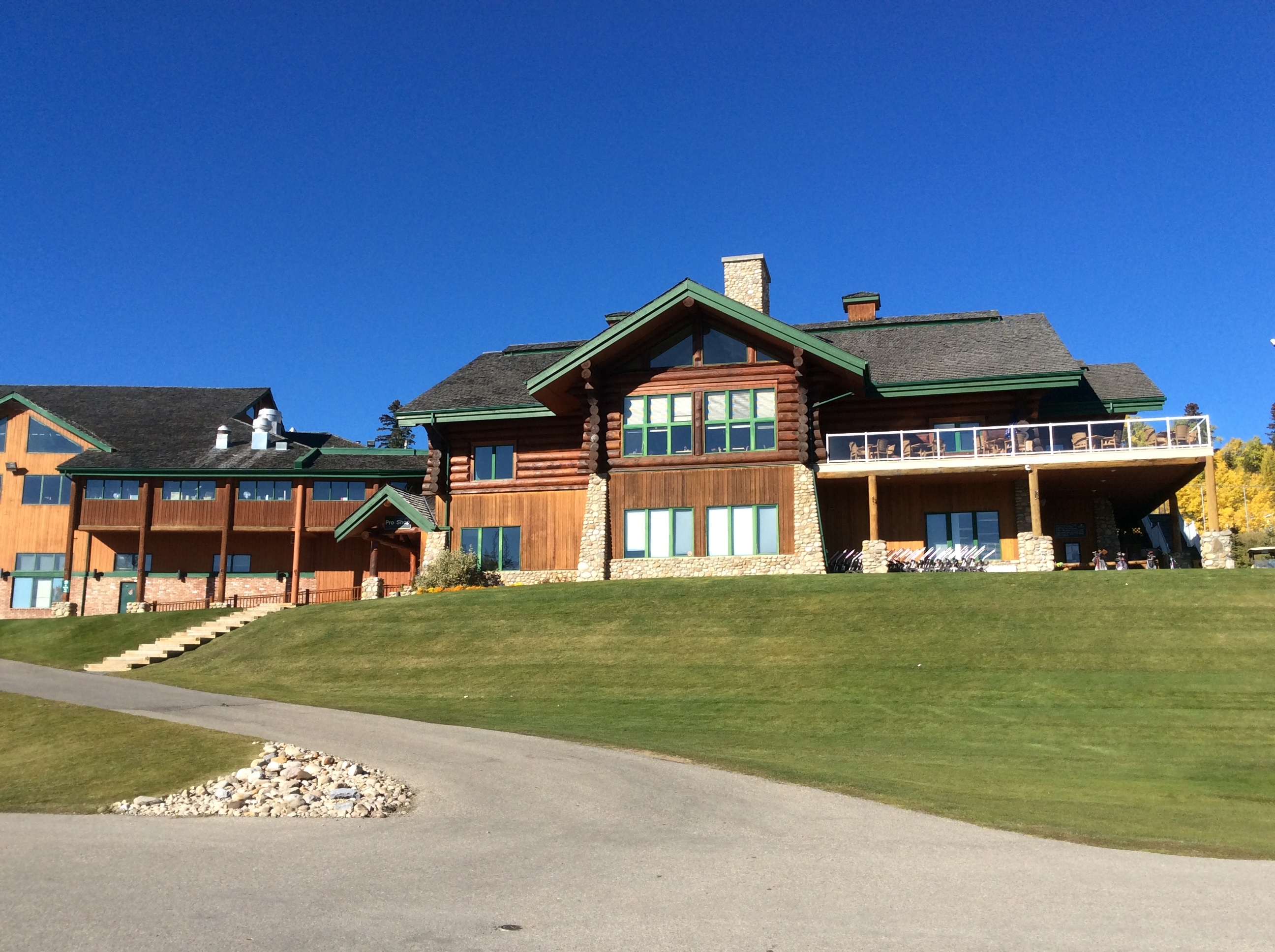 It was a beautiful warm day, this September morn, when we headed out to play golf on the Wintergreen Golf & Country Club at Bragg Creek, Alberta. My friend and I had a tee time for 11:39 a.m. and the timing could not have been more perfect! It was +6 C when we left home and at least +10 C and sunny when we arrived at the course and the mercury was only rising. The temperature hit a day high of +22 C when we finisThe pitching range, located close to the starter’s shack, is one of the reasons people like to play at Wintergreen. There were five stations set up with balls that we could hit out towards greens to pitch to that were 50 and 100 yards out. The driving range was in an area nearby, but driver’s aren’t allowed. The range slopes way, way down into the valley and it was not long enough to use a driver.  There was no GPS on the golf car, and only limited information on my SkyCaddie!

We played from the white/red combo tees 5357 yards rating 71.3, slope 13They’d put us off on hole #10 and were told it was cart path only today. This was disappointing for me, as my friend has her own pull cart and prefers to walk. It turned out that the two fellows we were playing with were also in a cart, so the game wasn’t all that quick with all the back-and-forth and the walking all of us needed to do! The fairways were soft (hence the no golf car rule) and some places quite spongy. Sometimes I did find my feet were sinking in the grass but on the other hand, the divots were easy to take.

There were five par 3s and two had tough pin placements that led to bogeys. Luckily, we used our own GPS because two of the holes were over 20 yards longer than listed on the card. All the greens are a generous size. 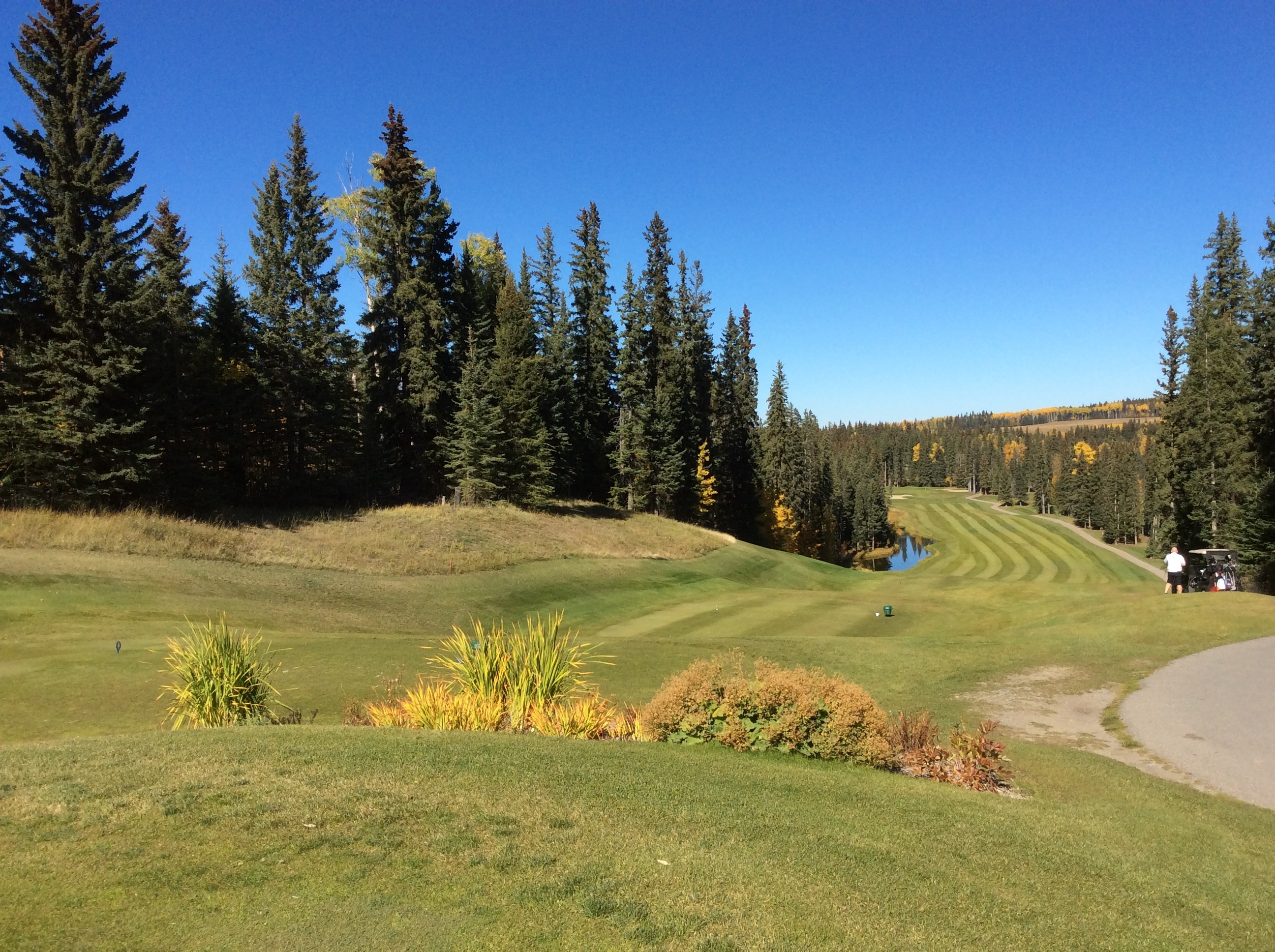 The par 4s were reachable in two shots for me, although two were uphill and around 300 yards. I needed a 3-wood for my second shot!

The par 5s ranged in length from 397 to 467 and none of them were easy to be on in three shots. My best par 5 was the 18th hole at 397 yards.  This hole is a dog left and plays uphill.  The green is protected by a pond and rocks. I had to lay up with my second shot and hit my 3-wood to the green for a par. I know if I had played the course before, it would have been easier to play these holes. I guess I rely on the GPS more and more – especially when I need to navigate around bodies of water, which Wintergreen has.

I hit a lot of fairways and greens. I was disappointed in the number of putts I had but I was not all that surprised since I was playing the course for the first time.  However, I played with the same Titleist ProV1 #4 with an orange circle around the four and three + marks in orange on the back side!   My score was 44 + 43 = 87.

All-in-all I would give this course a three and a half out of five rating.

The scenery was beautiful, especially with the leaves turning bright colours of orange and yellow. A pretty picture to behold with the multitude of fir trees in green.