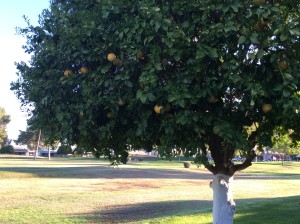 The grapefruit tree in the backyard at Ruth’s condo in Sun City, Arizona

I’ve known Ruth since September, 2013 after I moved into the condo apartment building at Discovery Ridge in Calgary, Alberta.

I was just arriving home from golfing and we met in the hallway.  She asked if I had been golfing and I said that I had been, (which was a pretty good guess on her part, since I was dressed like a golfer!)  She said she golfed as well.  I then asked her if she played bridge, by any chance, and she said she did.  We became friends immediately.

We had a couple of bridge games the following months and then Ruth was off to her conto in Sun City, just outside of Phoenix, Arizona, for the winter. Last summer, she spent some time at the cottage at Sauble Beach, Ontario and then went to Europe for a month.  But before leaving for Sun City for the winter once again, she asked me if I’d like to come to down and spend mid-February to mid-March with her there. I said yes, it would be a welcomed relief to the dreariness of winter — and, knowing Ruth, a lot of fun!

I arrived at her place in the late afternoon and she asked if I was up for going to a card/birthday party that night.  She said there would be about 20 people there and we should take some wine with us and arrive by 7:00 p.m.

It was the first time that I’d ever been to Sun City, but I’ve known about Del Webb’s self-contained community for seniors for decades. Opened in 1960, Sun City is a subdivision of 40,000 residents — and it’s built exclusively for active seniors — there are residency restrictions that require at least one resident in each residence be 55 years of age or older. There are other Sun Citys — but the one where Ruth has her condo is the original Sun City — which is now seeing residents who are the grandchildren of the original owners.

But back to playing cards! It turned out we had two tables of eight and one of four and we played a card game called “65”.  Now that number has nothing to do with age, although judging by the folks at the tables, it might have been!  Every player needs to play with 65 cents and it’s similar to a game called Five Crown. If you want the last card that has been discarded, you can buy it for 5¢…but you also have to take four more off the deck, so your hand gets bigger — which isn’t necessarily a good thing!

That’s because the point of the game is to rid yourself of all your cards.  Needless to say, this card game is a take-off on rummy, and at the end of the game, you are lucky to have any coins left from your 65¢ stash! This group likes to have a couple of drinks while they play, and the game is usually over by 10:30 p.m.  It was a lucky night for both Ruth and I as we were the winners!  Not a big pot, but bragging right

We golfed.  We shopped at consignment stores, looking for furniture to outfit Ruth’s condo.  We played bridge at one of the Sun City’s community centre — and even went to live entertainment at one of their recreation centers a couple of times for the incredible ticket price of $13! Once we saw a fantastic Barbra Streisand imitator — and she flipped her hair around to make you think it was really her, and another who impersonated Neil Sedaka, too. And the $13 didn’t just include the Las Vegas-style of show, but bratwurst and sodas too!

We had dinner parties, and went to a couple of banquets, went lawn bowling — the time flew by. Repeat the above for four weeks and that was the theme!  We had beautiful weather almost all the time but a few times we were really cold out there on the golf course. Going south in the winter doesn’t always guarantee the heat.

I’m Maureen O’Shea and I’m 80. This is how I came up with the name 78 mph and how GoDaddy helped me set up a GoDaddy-managed WordPress site.