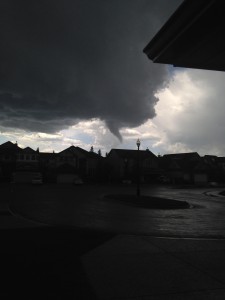 You might think that with the road trip over, life would return to its own hum-drum rhythm but that just doesn’t seem to be in the cards for us. We have things to do – even if the weather tries to get in our way.

And, speaking of weather, Calgary had tornado sightings last week. In fact, there were seven different funnel clouds seen in the vicinity of our city. When the tornado warning was first issued, it was my granddaughter Lily who got the notice on her phone: she told her mom, Bridget, who phoned me to let me know of the danger.

There was no alarm sounded like there have been when we’ve been in the path of a possible tornado like what’s happened to me a few times when I’ve been in the USA. In Minot, North Dakota, for example, I was there with a group of women playing in a golf tournament there, staying at the Comfort Inn.  The skies began to darken and next thing you knew, there was a piercing alarm sounded – not just throughout the hotel, but the entire city. 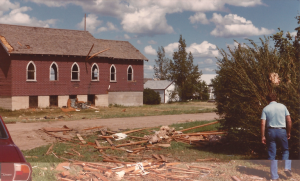 The window-less church in Pennant, Saskatchewan. Heather’s father, Gerald, is surveying the damage.

They also had a communications system put in place where they kept us advised. We knew the alarm had sounded because of a possible tornado developing, and they kept us apprised of the situation until the bad weather had passed and we were out of danger. 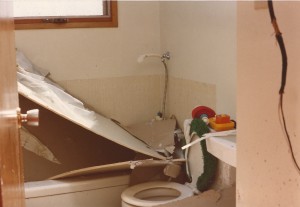 My niece Heather was at home in Pennant, Saskatchewan when a tornado ripped through that tiny village back in July of 1983.

Heather was home with her two small boys; her husband, Bernie, was away. As the wind and rain became more violent, Heather made the decision to take the boys down into the basement.  When they were on the first steps to the landing there was a sound like an approaching high-speed freight train.  The gyproc from the stairwell ceiling fell to the stairs and Heather and the boys slid down it into the basement where they took shelter under a table. 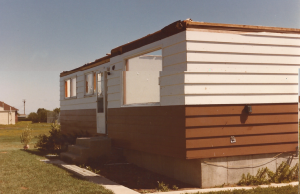 What was left of Heather and Bernie’s house in Pennant, Saskatchewan after the tornado ripped through their village.

When all was said and done, no one in the entire village was injured, but there was a visible path where the twister ripped through, demolishing the skating rink and, like the house that Heather and Bernie’s family was living in, many other houses too.

To help me with this blog post, Heather went digging and found pictures of the aftermath of that tornado and agreed to let me share those pictures with you. She says, “The reason we didn’t go under the stairs was because the roof was open above them.  Our basement was partially finished: the area when you first came down the stairs was done and had a door that led to the unfinished part.  We went into the unfinished part because the rain was coming into the finished part and it just felt so much more exposed.  Even though the gyproc had fallen, I wasn’t entirely sure that the entire roof was gone. When we were under the table and rain started coming through the floor above, I knew the roof was gone.”

With the changes of weather patterns we’ve been experiencing over the past few years – with tornadoes becoming more common in places where they were once only legendary, it’s time for communities to consider and put in place Early Warning Systems. Not only that, but people need to be educated that if you happen to be in a twister’s path, the only way you might be lucky enough to survive is to find shelter. Shelter may be in a basement or a purposely-built storm shelter, or underneath your stairs. Accuweather.com Senior Meteorologist Alex Sosnowski writes that if there is a possibility of a tornado, you should assume the worst will happen.

If you don’t have a basement, find what ever shelter you can. Hiding underneath a heavy wooden table may sound ridiculous, but it may protect you from falling debris.

Thinking about what happened last week in Calgary, I’m a bit astounded that we don’t have a better early warning system in place, or that many people I’ve spoken to since don’t realize how dangerous a tornado can be. Yes, you might be in one of the skyscrapers downtown or in the kitchen of your custom-built home, but sticks and stones, glass and steel are no match for the fury of a funnel cloud touching ground.

By the way, Heather has some parting comments about the long term impact the tornado might have had on her boys. She tells me:

By the way–I worked hard to keep our kids from having fear of thunderstorms. In the years following the tornado (in fact within that first month after -we had another violent storm)  we’d go “clean the basement” when I felt there was a tornado possibility!  The kids never figured it out until they were older and I told them!  None of them are scared of storms but they are all smart about them.

So tell me: if a tornado is in your area, are you ready?